Having seen Mum safely onto her return flight from Bari, and decided against our intention to travel south to Sicily, based on the experience of poor roads and dangerous driving, we instead headed west and crossed the entire country in four hours!

Bertha coped very well with the slow inclines up (and steeply down) Italy’s Campanian mountains.

We hadn’t intended to drive so far but a tail wind pushed us towards the coast and at 6pm we were camped outside the ancient Porta Marina of Pompeii and finishing the last of our Greek ouzo. We had just clocked up 177 miles and 2,080 in total for the trip. What a distance we had come! 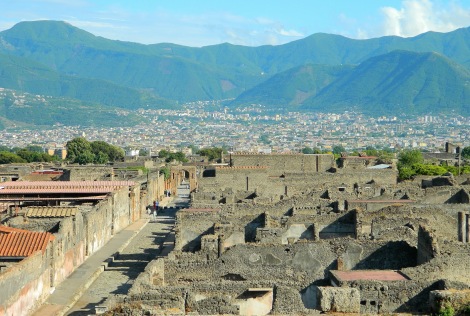 Pompeii in the bay of Naples

The campsite was small and cramped, largely full of Dutch and German touring couples. The only Brits were from South Wales and they made a point of sneering at our small shot of ouzo after a mightily quick set-up on camp. After staring incessantly, they plucked up the courage to speak to us and asked several questions in one go.

They quickly retreated when we told them we had driven from Bari after crossing from Greece and were on a 3 month tour. It happens time and again. People (always Brits, never any other nationality) want to tell you how big their trip is, where they’ve been, what they’ve experienced, how much money they’ve saved – but only if their trip is more adventurous than your own.

We usually find that these people walk away only to return a few hours later (or the following morning in this instance) to ask what we do for a living. It’s happened to us so many times over the years, but it’s quite charming really. 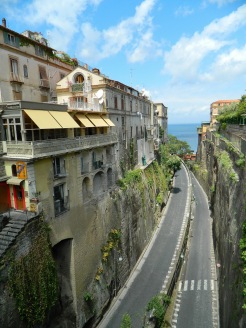 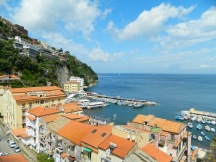 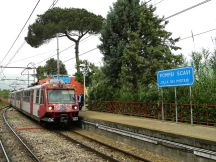 We spent the next day revisiting old memories. A train ride through the sprawling and dingy suburbs of Naples got us back to Sorrento where we wandered the winding old streets and marina walls, dodging cruise ship tours and finding the hotel we stayed in so many years ago.

The half hour train journey back took almost two tedious hours as the driver and a teenager got into a scuffle and every other man it seemed got involved. A taste of urban life in the bay of Naples.

It all ended in tears as the polizia interviewed the teenager publicly on the platform. All we could do was to wait for this silly episode to conclude. 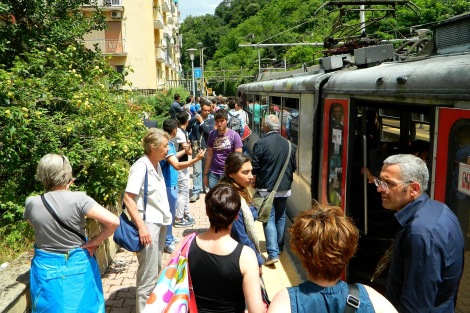 Another day, another petty Italian drama

The afternoon and early evening was spent wandering the ghostly city of Pompeii.

We’d visited before but the experience was still unique as we drifted in and out of the buildings imagining the lives led in the grand villas, the simple terraced houses, the open-fronted shops and bars, the public meeting places, temples, the amphitheatre, gladiatorial ring  and the brothel – actually in the best state of repair – sex still sells!

Lady in a quiet corner 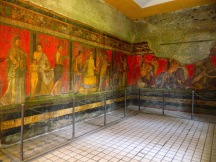 The temple of Apollo
It was a thought-provoking experience and sobering to see the mountain of Vesuvius towering dark and imposing above the derelict skyline.

It was going to take something extra special to lure us away and an evening of trip planning provided a promising route… to Rome. 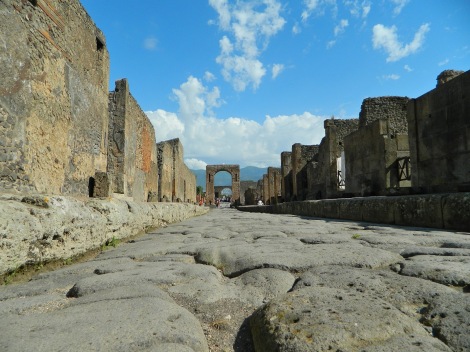 The excavated streets of Pompeii