After cycling more than 90 miles across four days it was time to slow down and enjoy a couple of gentle days mooching about the medieval town of Mirepoix in the Ariege Pyrenees.

This walled ‘bastide’ town was built in the 14th century as part of a massive programme of settlements planned by the French duchies in the South at that time. It was never attacked and remains in pristine condition with its centrepiece a gorgeous market square of timbered houses and shops, situated around a covered and beamed walkway which boasts gargoyle and ethnic human faces in its many carvings. 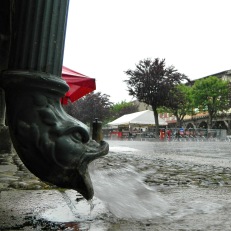 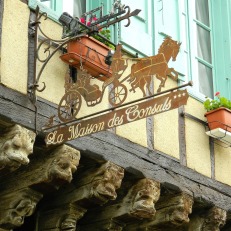 On Saturday night under ominous skies we went to the square at the advertised time of 6pm to enjoy the ‘fete des bandes’.

As rain started gently falling, the town Marie climbed up on a ladder to locate an overhead fuse box and switched on the square’s lighting system. A megaphone in hand he introduced the first of five brass swing bands which were all from the surrounding area. The fete turned out to be a jovial musical competition in what became a pelting thunderstorm.

Abandoning the stage set up in the market square the various bands instead set up next to bars and restaurants under the covered walkways. It was a noisily brilliant couple of hours as the thunder crashed and the lighting forked above us as we all followed the music on its impromptu procession around the square.

The skies remained ominous the next day. Ignoring them we set out on a 30kms bike ride to see the walled village of Camon, famous for being “the village of 100 roses”. The cycle along a former railroad track was passable after the previous night’s storm. About 3kms from Camon Simon’s bike got a flat tyre and it was only then I discovered I hadn’t packed the pump. Ouch.

We arrived in Camon on foot pushing the bikes as it started to rain. A charming Tabac owner chatted merrily away to us about who might or might not be able to help us out with a pump or repair kit together with gossip about the various villagers, which we partly made out and made up the rest. She made us a baguette lunch stuffed with local ham and a hot coffee as it was time for the French lunch and she was closing for the day.

Beautiful Camon in the rain

We stood in the shelter of a rampant rose bush which was climbing the abbey wall, and were joined for a soggy lunch by a pretty cream Labrador who then dashed about with us as we tried various houses, garages and the tourist office to find a bicycle pump – it seems we were in the only French village without ‘le pump’.

Squelching our way back down the increasingly flooded and muddy track we met a jolly French family cycling in the rain. They had a pump but our tyres were the wrong fit so we waved them off with thanks for trying to help. Half an hour later they overtook us on the track. An hour later we heard them calling to us from below a railway bridge we were tramping across. Son and dad gamely climbed up the steep banks drenched with rain sodden weeds and produced a miraculous pump that fixed the tyre, before they both slithered their way back down again.

We cycled 3kms at speed headlong into pelting rain and not caring about covering our bikes and ourselves with muddy spray. At a roadside junction a car hooted and it was our family once again who despite being soaked through themselves were waiting to see how far we had got.

We waved a fond farewell just 6kms from Mirepoix. The air in the tyre lasted for another 4kms before we were once again forced to walk the final distance in the heavy rain back to Bertha and a hot shower.

After throwing away clothes which were beyond a wash we toasted our happy meeting with such a lovely and generous family. And then the sun came out.

The sunshine after the rain

The next morning we watched our motorhome neighbour fuss about his sleek mountain bike and inflate the tyres with exactly the make of pump we had need of the day before.

We both fixated on the pump which was lying in full view just a couple of feet away from us. It was tantalisingly close, out of reach and ironic. Ah well.