We drove out of a cloud-covered and chilly Belgium and crossed Luxembourg to the border with Germany formed by the River Mosel. We found a picturesque aire alongside the river next to a harbour full of pleasure boats.

Back on the bikes we sampled our first Luxembourg wines with the help of a charming German wine seller in some local caves. We discovered ravishing and fresh Auxerrois which despite being a varietal from the French town thrives best along western slopes of the Mosel (according to our host).

We were amused by the local custom of 11.30am being ‘Cremant time’ observed by all local vineyard workers as the church bells rang out the half hour. This followed the 7.30am toll bringing the workers into the fields to begin their day. 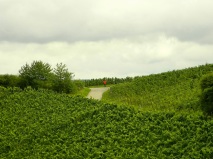 In amongst the vines

Mosel views across to Germany

A punishing cycle up the steep slopes of the Mont de Vingnes treated us to a view of the green and curving river through the steep vineyards of both countries.

It was an exhilarating freewheeling ride back down to river level and of course a bottle of our new favourite white wine in Bertha by the waterside, as the heavens opened and terrific rainstorm battered us before clearing for a beautiful sunset.

Schwebsange Aire after the storm