Having learnt much about the First World War history of Verdun we decided to visit the battlefields to understand the scale of the defensive manoeuvre and see the monuments commemorating the French dead and missing.

Climbing high up on the ridge outside of the town we entered the ‘red zone’ where much of the fighting occurred. Today it is a wooded landscape criss-crossed by wide tarmacked and well-marked out roads signposting the many cars and touring coaches to the battle sights.

Memories of War in Lorraine

The Ossuary at Douamont was extraordinary. Standing in the middle of landscaped lawns the gigantic concrete phallic-looking tower had, like the Verdun ‘monument to victory’ a fascist style of architecture. Immense, grey and imposing outside, inside it was illuminated by a sickly orange light pouring through the thousands of coloured glass bricks that formed its windows.

We paid to climb inside the tower but half way up encountered the ‘route barrée’ due to renovation works. We hung about in the gift shop looking at ghastly postcards of war photography before seeing a French film about the battle. Neither of us enjoyed the epic tone of the narration which eulogised the seemingly pointless loss of lives.

Outside, Simon tried to find a good location for a photograph but was hampered by the noisy engineering of a vast platform and seating arena intended for the 100 years’ anniversary. The many French workmen seemed grumpy and pressured and the loud clanging of their scaffold poles, together with the drilling and sawing of wood meant quiet reflection was impossible. I wandered around the building trying to understand the meaning of its incongruous design. It wasn’t until I bent down to peer into the slanted windows that lined the base of the walls that I saw the underground concrete bunkers piled high with millions of human bones.

The bones of WW1 soldiers

Skulls rolled on top of jaws, femurs and fingers, spines, hip bones, knee caps, metatarsals and feet. I felt foolish and ill. Of course, an Ossuary is an open grave of bones above ground. Reeling from the enormity of the evidence of human destruction I staggered down through the construction site to find Simon.

We walked quietly away from the place reflecting that it was impossible for the authorities then and now to identify the more than 130,000 killed soldiers, and feeling aghast at the minds that mythologised the pointless action whilst it was being carried out simply to decide to store the bodies and later the bones jumbled together without ceremony near the battlefield. 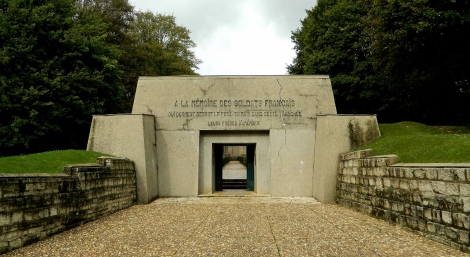 A short walk away into the quiet of the woods and we found the ‘bayonet trench’, the oldest monument to the battle. Originally it was a mass grave dug by the soldiers and marking the burials of colleagues and friends with their bayonets and helmets. Today a low slung concrete shelter protects the trenches but the bayonets have gone.

Like the Ossuary it felt eerie and sad. Neither place had the breezy open aspect of the Ypres battle fields, nor the calm orderliness of the lines of marked graves and endless walls of names carved on white masonry.

We decided to make one more stop further along the ridge to see the ruined village of Fleury-devant-Douaumont.

The ruined village of Fleury

Not a battlefield but a place of everyday life until it was overcome with shelling. What is left is a quiet wooded slope of grass craters, mounds of stone and grassy hummocks.

It was moving and desolate but enlivened by a noisy group of whooping school children tumbling in and out of the craters and running up the soft slopes of the now buried rubble of homes and lives.

With some relief we left the place and drove down very narrow lanes into the pasture land of the Lorraine to find a quiet home for the night, in the wind and rain, outside a village community centre.

Sheltering from the wind and rain at Les Isletts

Our 5 Euro fee included electricity on the aire and a rather boggy shower in the centre, which was needed after a day in the damp air.

After some warming comfort food we reflected upon an unplanned and very moving visit to Verdun.

The bones of WW1 soldiers

The ruined village of Fleury

Memories of War in Lorraine 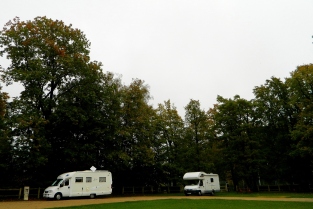 Sheltering from the wind and rain at Les Isletts