Flat grey skies settled over the renaissance rooftops and colourfully painted facades of Roman Wels so that it seemed as if the townscape was a theatrical back drop.

With an expensive take out coffee in hand, and already regretting the easy-on-the-budget prices of every day purchases in Poland and the Czech Republic, we strolled around the small but historic centre. 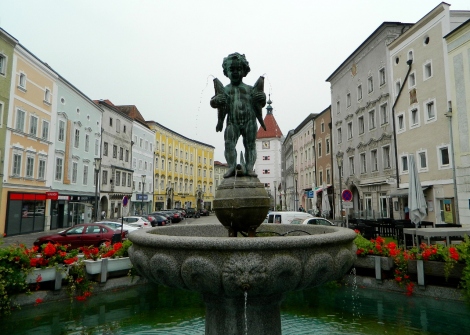 Established by the Romans as a grain and wheat trading city its parish church contains the foundations of their original basilica and almost perfect sandstone portal with human faced lions, through which we passed to admire the later Gothic stained glass windows… until we were thrown out by a sternly bobbed-and-banged church warden.

A medieval burgher’s house in blue and white stucco included on its front a rare Roman grave medallion, showing a married couple. It was in pristine condition and very moving to see.

Not too many steps away we entered the city’s old town, heralded by a brightly painted renaissance merchant’s house with a Gothic oriel window that you could easily imagine wiling away time within reading a book or watching the busy life along the city’s main street below.

Behind, Wels Castle and its ancient chapel squatted in thick-walled security alongside a tributary of the river Traun that would have fed the mills of the small city’s granaries. 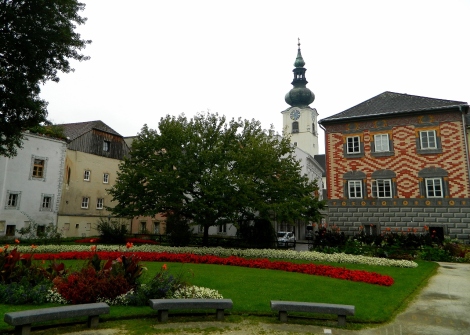 We counted three traffic wardens in a busy hour of enforcing parking regulations in the narrow cobbled streets. Mindful of the exact time on our own parking ticket, noon plus one minute, we headed south to the Benedictine monastery of Kremsmünster.

Kremsmünster Abbey from the south

The vast site of the Abbey complex is set on a high bluff above the valley of Krems, through which the Traun winds its way south.

Parked up for free and with the abbey gates in sight, we duly headed into the white and gold towered baroque courtyard of its entrance. No one was around.

Founded in 777 by Tassilo, the Duke of Bavaria, on the reputed spot where his beloved son Gunther was killed on a hunting expedition, the abbey is home to the Benedictine order and a local school.

We enjoyed the incense in the air at Gunther’s tomb and nearby Archangel St Michael’s chapel. We pushed open heavy wooden doors, passed the well-tended graves of centuries old Abbots, walked up winding staircases; saw baroque interiors, marvelled at painted ceilings and dallied at a display of some letters written by Goethe but saw… no one.

The “Abbey on the Krems”

Bemused, we headed into the obviously open souvenir shop to ask about the abbey’s fish pools and were directed to a Roman-style sanctuary of water gods guarding five marbled ponds of salmon and carp in various sizes and a 28 year old black velvet fish hoovering along the pristine floors.

It was mesmerising to stand amongst the fountains and see the afternoon light play off the white walls and classically inspired statues as colourful fish darted between fountains and passed our feet.