France is always our gateway at the start and end of a trip, and we always return to it feeling differently to how we arrived.

Less excited, more thoughtful with a host of new experiences and ideas to discuss and share, and often with new commitments to making changes to our lifestyles at home. A trip is, after all, about what you take away from it and how the experience of travelling enriches your everyday routine.

Travelling west from the German border, we hoped to stay in Metz but the free parking for campervans (although visibly policed) was being used by local cars, so we moved onto a favourite stop at Dieue- sur- Meuse.

Campervans only – French bureacracy in action

The rural countryside of the Lorraine was a riot of Autumn colours but the harvest was of a different feel to the Schwarzwald’s picturesque fruit and kurbis one.

Large roadside fields of corn glowed golden whilst others were a freshly ploughed rich dark earth. Huge skies hung blue over the vast landscape of undulating fields and meadows dotted with villages which we picked out when passing above them via a network of sky-high viaducts transporting the toll motorway westward.

There was a sense that the land of the Lorraine was being picked clean and readied to sleep for the winter.

When passing through Lorraine, enjoy the quiche.

Stopping for a fairly obvious reason in Champagne, the vineyards were busy with armies of small white vans and pickers bringing in the grape harvest.

At Marieul sur Ay, the town it seemed had shut down for the duration. The champagne houses were shut up and bolted and even the boulangerie was closed as the baker had a two week holiday.

No one was able to offer a tasting as everyone ‘had a million other things to do, it’s the harvest’ we were told by a grumpy but award winning vintner.

We stayed instead with a local producer south of Epernay where we had previously enjoyed a wonderful evening in the convivial company of Monsieur Phillipe Leclerc- Massaurd.

Monsieur was of course busy, ‘it’s the harvest’, but Madame chatted with us over a couple of glasses of their excellent brut. Our rusty French improved vastly with the bubbles.

The next day, we took to the bikes and got into the heart of the vineyards. Cycling during the French lunch hour to collect a baguette from nearby Vertus, the white vans had disappeared and all was peaceful.

Wanting a good destination to celebrate a birthday we found the perfect stop at Coucy-le-Château-Auffrique, a walled hillside town dating back to the 11th century.

Its massively walled fort with 33 towers survived intact until the 1600s when it was ordered to be dismantled in a move reminiscent of the warring Florentine dukes who used to lop the towers of each other’s towns in fits of jealousy.

Caught up in the Battle of the Aisne, the fort was occupied by the Germans in the First World War and subsequently heavily damaged upon their retreat.

The rubble of the collapsed keep is as the Germans left it, and a reminder of the small town’s darkest period of history. 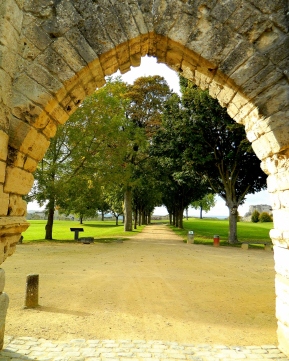 Inside the walls – Hotel de Ville

Heading to Dieppe for the ferry we drove through the magnificent Pays de Bray countryside and stopped in Neufchâtel-en-Bray, famous for its heart-shaped soft white cheese, and which is twinned with Shropshire’s Whitchurch.

We couldn’t see any immediate reason why the two town’s were twinned. We compared (rather unfavourably) Whitchurch’s high street and Tesco with the French town’s bespoke shops and gigantic E.Leclerc supermarché. But it was fun to see the place that features on the road sign we drive past constantly when staying with family.

Pedalling a 36km round route to nearby Forges les Eaux we both revised our opinions of the two town’s twinning committees. The countryside around Neufchâtel-en-Bray had a distinctly familiar feel to its rolling green fields of grazing dairy cattle and brick built Victorian style farmhouses complete with french windows and shutters.

We put the architecture down to the Voie Vert being paved over the former local railway but it certainly felt like North Shropshire.

Cycling through a former station on the Voie Vert

With a weekend in hand and just a handful of kms to travel to the port at Dieppe, and having clocked up more than 3000 miles on our trip around Prussia, it’s time to slow down, take stock and celebrate some wonderful experiences.

Time too, to catch up with news from ‘Pudding Island’ and prepare ourselves to return to the routine of home and work, but with a renewed energy and an appetite that is always the final gift of a wonderful trip.

So for one final weekend, we are currently away…