The great river Po flows eastward across northern Italy from a spring in the Alps, to the Adriatic Sea near Venice. It is the longest river in Italy and extends along the 45th parallel north, through many important Italian cities and towns, Turin, Piacenza and Ferrara. It’s even connected to Milan through a network of channels which Leonardo da Vinci helped design.

We spent a day cycling along the high banks of the Po from a free camper stop at the tiny hamlet of Ro. Ro didn’t consist of much other than a motorway flyover, a riverside bar with wifi, a boat-based mill (now a museum) and some derelict farmhouses.

The river banks were busy with pedalling pensioners in lycra and racing Mamils (you know the acronym!) self-importantly shouting their way past us.

The wide green waters were shimmering in a blowy breeze and the high banks gave a view across summer-like fields of newly cut hay, and huge farmsteads complete with vegetable gardens and swimming pools.

We left the river briefly to explore at 13th century castle but arriving at its gates found it locked to non-members of the now exclusive country club. No matter, it was a lovely excursion across a pretty corner of rural Italy.

Following the Po to Ferrara we found a medieval-walled town dotted with enormous and imposing brick palaces and an astonishing Duomo. Bouncing along on bikes on the original cobbled roads we passed through the towering Castello Estense, built as a fortress for the ruling (and despotic) Este family in 1385.

They were defending themselves from their populace who were furious about tax increases. Such was the threat the castle was surrounded by a deep moat. It has a gloomily romantic past being the place in 1425 where the third Duke d’Este had his second wife and his son beheaded, having discovered their affair. 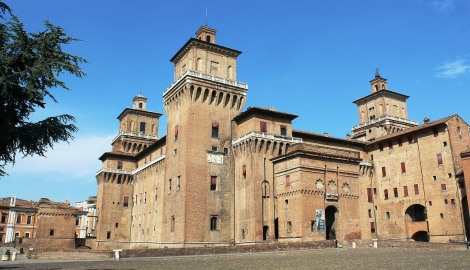 More cheeringly we admired the pink and white marbled cathedral. Regretfully its three-tiered marble façade with Romanesque and Gothic tiers was under scaffold but we loved its arcaded side, at which some point presumably medieval entrepreneurs had opened as an unofficial market place.

The tightly packed and narrow streets of the former Jewish Quarter were originally a social experiment by Duke Ercole 1 d’Este in 1492 to build a model Renaissance quarter. This he fully achieved, and we cycled through passageways formed by arching buttresses supporting the tall, terraced merchant and former tradesman’s houses. 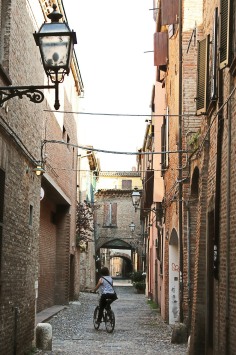 Peeking into courtyards and up stone staircases we enjoyed the aroma of abundant jasmine, honeysuckle and climbing roses in what is now a very bijou part of town.

The district ends at the striking Palazzo dei Diamanti decorated with diamond shaped stones and begun in 1492.

With 9kms of intact city walls, Ferrara competes with Lucca in Tuscany for a ‘walk the walls’ experience. We cycled along the eastern and northern section and were surprised by the numbers of joggers, bikers, skaters and scooters amassed on the gravel paths and racing in the late afternoon’s heat.

Bottoms up on the city walls

The town’s bells rang out the half hours and the walls gave views across acres of arable land to the banks of the River Po, Porta Po being the main gateway.

As it doesn’t draw big numbers of visitors (and doesn’t want to according to our campsite hosts who are ‘hopeful we stay nice and peaceful and quiet’), Ferrara’s feel was very comfortable, provincial and relaxed.

We found the liveliest quarter at dusk to be full of university students and lecturers, sipping Aperol Spritz in a hedged green piazza that is also a small hippodrome. It was churlish not to join them after such an enjoyable visit to their town! 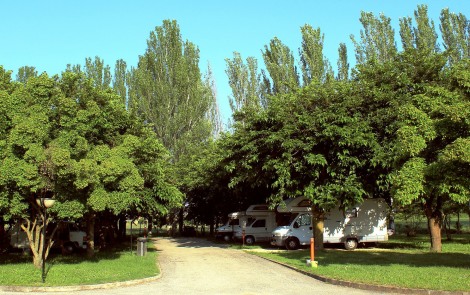 Keeping cool under the noisy mulberry tree at Camping Ferrara