Our destination this time was Transdanubia, the western side of Hungary bordering Austria, Slovakia, Slovenia, Croatia and Serbia.

We’d visited the north before so headed south of Lake Balaton, Europe’s largest inland lake, to the sunniest region of the country, and its wine making centre.

Not that we needed to hunt out the sun. Hungary was baking in four weeks of heatwave in which average daytime temperatures were higher than 30 degrees. This on top of an unusually cool May was causing concern to farmers and smallholders who worried about their fresh young crops of vegetables and vines.

At Nagyatád we wandered around a burnt grass field dodging snakes and flying beetles and looking up at gigantic wooden sculptures.

Established in 1975 by a collective of wood cutters, the park is a testimony to the woodworking skills of the region and a showcase of rural traditions and beliefs.

We didn’t always understand what we were looking at, but the sight of these weathered and symbolic figures and shapes, carved under Communism and visibly ageing, was very moving. 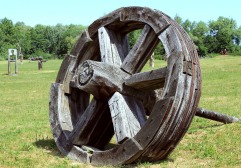 Staying at a smallholding in Patosfa at Camping Farkas we enjoyed meeting Pieter and Ina, Dutch owners and environmentalists who had bought the overrun site seven years ago and have reclaimed its vineyard and fruit orchard to create their own ‘little paradise’.

Camping alongside goats, chickens, rabbits, tree frogs, swamp turtles, and all manner of insect and plant life we learned a lot from them both about living sustainably, and living in Hungary. Their organic orchard was bursting with cherries, figs, prunes, apricots and mulberries. Goats milk is used for hand-crafting cheese and soap.

The language is always going to be a barrier, being most distantly related to Finnish and Estonian and not at all recognisable to a Western European ear. Locals had not exactly welcomed them, but appreciated the employment opportunities the campsite offered and a small team had established itself around the couple.

Pieter explained that whilst their homes may look ramshackle the average family had two flat screen TVs, a number of mobile phones, broadband connection and a serious smoking habit – all of which costs.

After Hungary rejected communism, families kept the homes provided for them so there are no mortgages to be paid by rural dwellers.

Attitudes seem a little ‘short term’ compared to our own domestic obsessions about saving and planning for older age. It was enlightening to spend time talking these things over with Pieter and Ina. 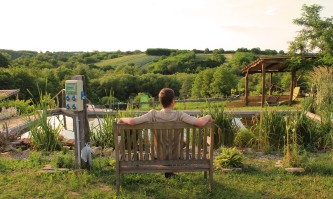 Enjoying the view as the sun sets

It was also refreshing, in all ways, to visit their wine cellar! Carved out of the bare soil beneath their outhouse, the cellar’s average temperature is a skin tingling 12 degrees. After the scorching heat of the day an evening sampling Pieter’s own 2015 and 2016 collection below stairs was a delight.

Typically, he makes 500 litres of white and red wine from his vineyard which includes a 400-year-old variety called Isabella. Washed down with Dutch cheese and extremely interesting conversation it tasted just perfect! 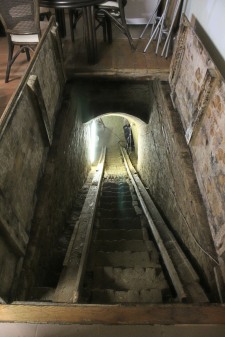 Steps down to the hidden wine cellar