The Orava region is named for the river which winds north east from the foothills of the Mala Tatra mountains to empty into a huge lake, dammed at Námestovo. 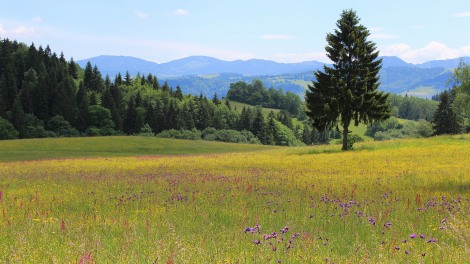 We camped in the Lower Orava at the relaxed and pretty town of Dolný Kubín and in the Upper Orava alongside the banks of the lake at Stara Hora.

Dolný Kubín had a welcoming and friendly feel and, in contrast to Hungary, basic English was widely spoken and there was a willingness to be understood if not. People we spoke to were enthusiastic about our visiting their region.

Crossing the Orava into town

Confidently in possession of an ordnance survey map of the region with bike trails marked upon it we headed out to see the star attraction, an old castle at Oravsky Podzámok.

A short 6km pedal away in theory it took us four hours to reach in practice as our interpretation of the map, and the complete lack of signage in the mountains, sent us around in an ever-escalating route.

Pedalling the bikes up mud and rough scree tracks in the forest, eventually we puffed and pushed them along rough paths of loose aggregate in granite chunks the size of potatoes. It was a work out.

We weren’t overly impressed that the one signpost we did find, turned out to have been mischievously twisted around (Cornish-style) leading us down 500 meters simply to have to climb them back up again. Keeping cheerful though we popped out of the forest and onto the E77 expressway thundering with lorries and fast cars.

With no choice other than to head down it, the next seven miles were pitched down a 12% decline at an average speed of 22 mph (us on bikes – 50mph everyone else) and clinging precariously to the edge of the tarmac road which had fallen away in chunks down the steep hillside.

Lorries hurtled by whipping up dust and loose chippings. We were saved by an impromptu gang of roadworkers filling a gigantic pot hole on our side. Waiting to go through their make shift signalling system after every other vehicle had gone first we gained a few minutes without traffic thundering behind us. By stopping and repeating this tactic three times we eventually got down the mountain safely. 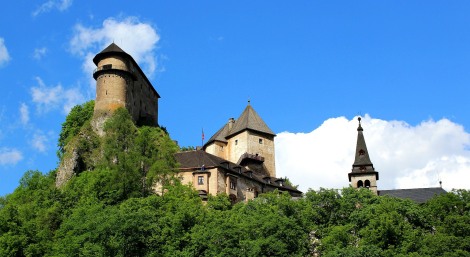 The famous castle was the setting for the original 1922 silent film of ‘Nosferatu’ starring Max Schreck. It is perched up on a rocky bluff and lends itself beautifully to an eerie tale of vampiric tragedy.

Too tired to venture inside we instead found a trail that got us off the expressway and through a former quarry site, which would have fed the nearby fossil fuel power station. Now we were cycling up and down slag heaps, bouncing and skidding on rough stones. Amongst the heaps, a series of benches were placed around a small religious shrine. 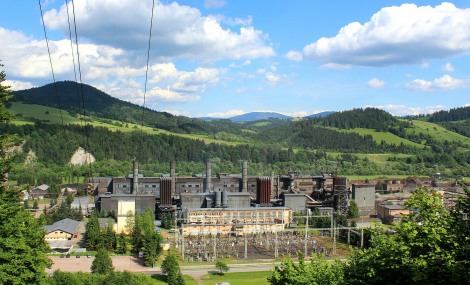 Above the power station

A weekend rock festival at the campsite sent us north to rest up at the Orava lake. It was a strange experience, which the weather added too being dark and windy before two terrifying electrical storms. The area, which we had supposed to be very touristy, was largely unkempt and down at heel.

The dilapidated lakeside campsites had clearly had their day yet were kept going seeming without regard for better maintenance. Not that this was reflected in the price. It was a hefty €20 a night to stay, barring Bologna, the most expensive of the trip. Other campers were all Poles, who despite the continuously crashing forked lightning, hurtled about the lake shore in power boats and on jet skis. 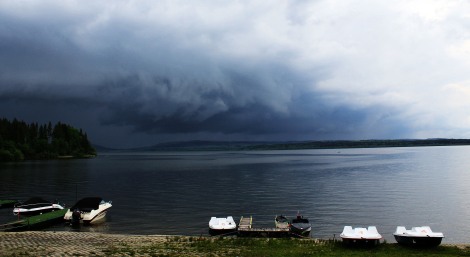 Another storm rolling in at Orava Lake

We found a quieter moment at Tvrdošín at a Gothic wooden church, fully restored in the 1970s. Together with six other churches in Slovakia, it’s unique in this part of Europe for its interior decoration of distempered paintings, wooden carvings and a beautiful rose ceiling.

It’s part of the UNESCO World Heritage site of Carpathian Churches and was warm and comforting on a chilly day. We were only 140 miles north of Budapest, which was baking in 30 degrees, and the weather had changed significantly for us.

Inside All Saints Church 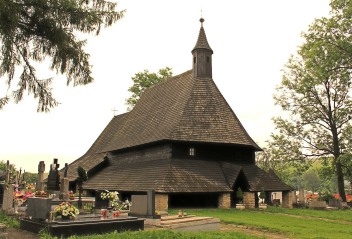