From Medieval times, Bohemia was synonymous with wildly beautiful landscapes, cut through by the sandstone canyons of the Elbe which provided a trading and transport route for the heavy freight of quarried fossil fuel as well as luxury items of exquisite cut-glass crystal chandeliers and tableware.

Populated by Germans, who received the invitation of Czech kings to settle the forested uplands it became one of the most wealthy and industrialized areas in the Austria-Hungarian Empire, and later in Czechoslovakia after World War I.

In the early 20th century North Bohemia was known as Sudetenland and in 1938, at a time of high political unrest, it was annexed by Nazi Germany.

Today, even according to Czech tourism promoters the region is not well visited and is one of the poorest parts of the Czech Republic with comparatively high unemployment rates.

Large parts of its landscape were destroyed by intensive coal mining under communism, and the wealthy and architecturally interesting enclaves and villas of the German communities were left abandoned and forlorn after their owners’ mass deportation from the country following the end of World War II.

However, much of North Bohemia is stunning. On today’s borders with Germany and Poland are the Ore Mountains, Lusatian Mountains and Jizera Mountains.

In contrast, the Elbe valley is at the lowest point in the Czech Republic and is Central Europe’s largest and most impressive sandstone gorge, created by the magnificent passage of the river on its way from the Krkonoše mountains to empty into the Nord See at Hamburg. 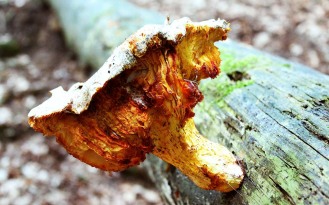 We stayed at a lakeside campsite at Stará Oleška, in the Lusatian Mountains close to the Czech border with Germany.

In a stroll around the nearby hillsides we found contrasting down at heel hamlets of ramshackle-looking rural homes, with grubby ground floor windows and doors all barred and guarded by noisy barking dogs, and well-heeled villages of renovated wooden framed homes in large and pretty garden plots.

Further west we visited Děčín, the German name for which was Tetschen, a North Bohemian town that unfolds in the wide basin of both banks of the Elbe River.

On the south side the impressive castle towers over the river bank, hewn out of the giant rocky sandstone cliffs.

Opposite, Pastýřská Stěna or Shepherd’s Bluff, is now a climbing rock face leading up to a prettily situated hotel and restaurant. Remarkably, we saw people scaling the rock face to reach the top. Apparently, climbers come from all over Europe to ‘enjoy’ this activity!

The Elbe river dissects the town from south to north, and is lined with roadways, a rail road and innumerable chimneys that once were the powerhouses of light industry along its banks.

Being the first week of July, it was the start of a two-day Czech public holiday, so the normally sleepy town on the Elbe was a hive of activity with hikers, cyclists and the afore mentioned rock climbers.

As we discovered on a steeply challenging 20km hike out of town, the Elbe wanders its way through a megalithic landscape of towering and tottering sandstone formations edging over the waters at heights of more than 300 meters.

Alone in the deep forests of tall pine and beech trees that line its towering banks we scrambled up woodland walkways to romantic lookout points along the river. Romantic in the artistic and high cultural sense of the late 1800s and early 1900s.

German Romanticism was later than in England when the poets, Shelley, Keats and Wordsworth explored nature as a conduit towards spirituality.

In some ways, it was more thorough, encompassing not just literature and philosophy but also music, Beethoven, Lizt, Shubert, Wagner, Schumann and painting.

Caspar Friedrich David (1774 – 1840) painted gorgeous and mysterious Elbe landscapes seeking to express the connection of the soul through unity with, and reflection upon, nature. Two of his most famous works are inspired by walking in the Elbe canyons. 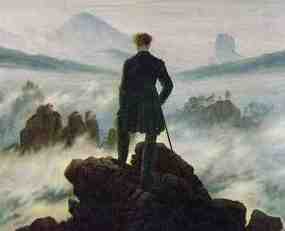 Wander above a Sea of Fog

Communism ended the romanticism of Bohemia and gave it a heavy dose of reality in the form of industry, extensive mining for coal, mass building of power stations and the carving up the countryside with railways.

After the tragedy of World War II and in its aftermath the mass expulsion of millions of German people from their lands in Bohemia, the Communist regime repopulated the area with Czechs, some of whom commented that they were being given a home and land to which they had no claim and no connection.

Yet even today, we heard elderly people in Děčín speaking Russian and some even speaking German, a living reminder of the changing fortunes of this corner of the Czech Republic and its tumultuous past.

Děčín was a very thoughtful final stop for us in Eastern Europe. It’s a small corner that’s not widely promoted to travellers as a place to visit, but we really enjoyed spending time there!