It has a long history. A home to dinosaurs and later, Bronze Age man, it was conquered by Vikings, the Danish (twice) and most recently by a horde of international tourists every summer.

Aside from Stockholm the region is the jewel in Sweden’s crown and is loved for its inspiring landscape, quiet country lifestyles and modern urban living in the historic towns of Kristianstad, Ystad, Trelleborg, Lund and Malmö.

We found camping at possibly its best spot, Tosteberga Hamn. The pretty, rural village of red-painted wooden houses is set on moorland which dissolves through wetlands into an archipelago of tiny islands and rocky skerries.

Boat in the bay

The marina is run by a fastidious harbour master and the local fishing club who have turned it into a welcoming place for campers.

Keen to keep the marina out of the hands of state control, they have developed a popular business that provides all necessities, strictly for cash only (both Swedish Krona and Euros accepted).

We spent two nights quietly pitched next to the small collection of boats and enjoyed rambling around the open fields and rocky boulders amongst sheep, cattle and ponies.

The animals, as we had seen everywhere in Sweden, were in extremely healthy condition and seemed very content! 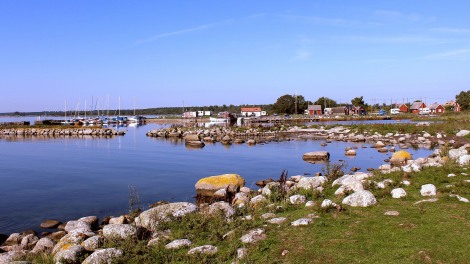 Tosteberga Hamn, in the Skane archipelago

An out-of-the-blue blazing hot day of 30 degrees saw a herd of dairy cows splosh their way through the wetlands and into the shallow and warm waters of the Baltic.

Some went in up past their shins and there was a general snorting of enjoyment and cooling down. Sea birds that had been gathering along the shoreline took off in noisily startled amazement, it was a sight to see.

The heat of that day dissipated into a spectacular sunset of pinks and purples. The air cooled rapidly, and we were reminded that winter is coming.

The harbour and shoreline will freeze up to 25 meters out to sea and in preparation for the long dark days when it is not possible to fish, the club has built itself a seaside sauna. There was much anticipation amongst the villagers, as well as the fisherman for the inaugural stoking of the coals that coming weekend!

Sunset at the marina

Kristianstad was founded in 1614 by King Christian IV of Denmark, then ruler of Skåne. He wished to establish an impenetrable fortress town that could repel invaders, but with architecture in keeping with the Renaissance.

His vision was successful until Sweden took back Skåne in 1658. The town remembers him through the Swedish variant of his name. 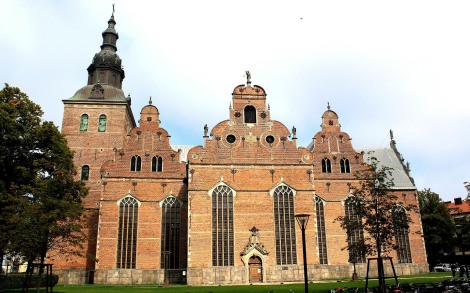 Today, Kristianstad retains its broad, airy streets set out on a grid pattern and broken with large, central squares. The impressive and towering Trefaldighetskyrkan squats alongside the train station and is undergoing interior renovation. We couldn’t peek inside.

Opposite the main square hosts the late nineteenth century Radhus, build in imitation of the town’s established style. The square was busy with electioneering as the days ticked down to the Swedish Election.

Shoppers and students mingled along the smart streets of international brands, Swedish favourites and quirky outlets.

The town had a bustling air. Particularly remarkable is the wetland centre, now listed as a biosphere reserve, that includes 21 observation centres and numerous footbridges and wooden walkways across reed-lined waterways. 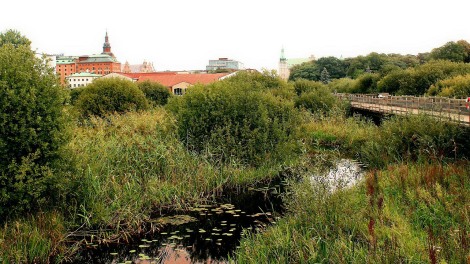 Groups of school children paddled about in canoes hoping to spot some of the 260 species of bird that have been recorded in the area.

We were most impressed by its central location, being our own route on foot back to the large out of town car park. Quite a way to enter and leave a modern city!

Beached on the rocks

Tosteberga Hamn, in the Skane archipelago

Boat in the bay

Sunset at the marina

Beached on the rocks