After a noisy overnight at Manching in a busy, free camping stop just off the autobahn, it was an early start to our Munich base, the car park of FC Bayern München. We planned to arrive on a Saturday as it would be quieter on the ring-road.

A 45 minute ride on a wide, clean comfortable train saw us arrive in the city’s main square Marienplatz in time for the 11am glockenspiel spectacular on the gothic town hall’s clock tower. The painted figures danced in and around scenes of jousting, feasting and courting and we joined the throng in ‘oohing’ and ‘ahhing’ at the sweetly lovely sight. 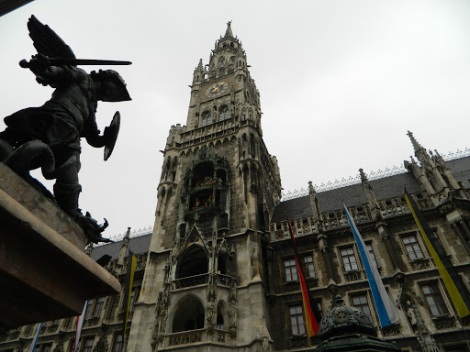 ‘Trip-nouse’ momentarily deserted us as we paid a hefty bill for two tiny coffees and set off on a walking tour with the city map in hand. It was another chilly early spring day, with temperatures not climbing above 7°c all day.

Wandering around the grand and gracious Altstadt we saw gothic and rococo churches, balconied merchants houses, turreted civic buildings, the palatial Residenz of Ludwig I (and all the little Ludwig’s which followed him) and ended up, inevitably in the Hofbräuhaus, Munich’s grand dame of bierkellers.

Lunchtime was in full swing (and rowdy) and we ambled amongst long tables of drinkers tucking into litre jugs of foaming beer and tackling the largest pretzels known to mankind. An oompah band played on the stage in the centre of the hall under painted ceilings showing traditional festivities. Harassed waiting staff wore national costume, buttoned up lederhosen and jerkins for the boys and distinctly unbuttoned blouses and bodices on the girls! 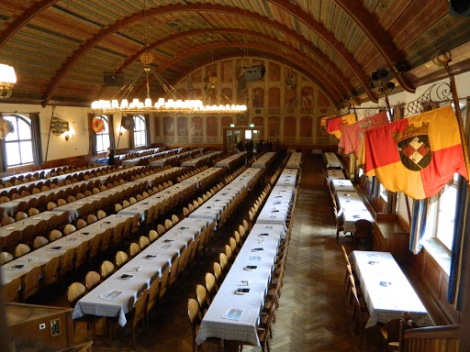 Getting ready for a busy night in the ballroom at Hofbräuhaus

Upstairs we glimpsed the ballroom, also heavily painted and hung with flags and colourful drapes depicting the heraldry of Bavaria. In 1920 Hitler’s National Socialist Party held its first annual meeting there and it was easy to imagine the scenes of drink-fuelled chanting and singing and chilling to remember what it ultimately led to…

Opting for the welcoming aromas of the gourmet Viktualienmarkt we wandered amongst the tempting stalls of cheese, fruit, meats and deli goodies. Lunch was a hot fish roll and fries with a beer in the market’s beer garden. 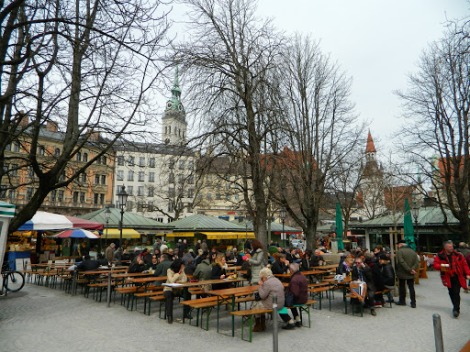 Fortified, we set off to find the fairy-tale perfect Cuvilliés Theatre (or Old Residence Theatre), built in the 18th century and host of Mozart’s first performance of his opera, Idomeneo.

The beautiful red and gold gilt balconies shone in light from mirrored candelabras and the soft plush seats allowed us time to gaze up at the many cherubs and classical gods supporting the endless balconies and opera boxes. Ravishing! 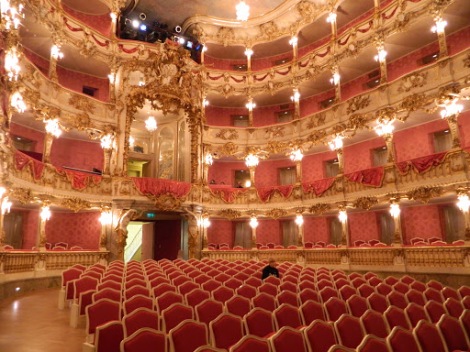 A stroll along Maximilianstraße gave a glimpse into the moneyed life of Munich’s millionaires (it has more per head after Hamburg) and the high-end fashion boutiques were full of clients newly parked outside in Porches, Bentleys and Aston Martins.

The extremely well groomed middle-aged men and women getting out of the cars were self-possessed and demure, but utterly distant from the two of us tramping along in walking boots and jackets. A few small dogs were being clutched under fur-coated arms and the avenue wafted with heavy perfume and expensive cigarette smoke. It was fun and fascinating to see!

We admired the Residenz and Opera House and chortled at the Porsche parked on the pavement getting a ticket.

Late afternoon found us wearily heading back to Marienplatz for the U-bahn home when we stopped and reconsidered. It’s going to be Saturday night in Munich… and the city’s football team had won Germany’s version of the Premier League earlier in the day.

We headed to a small intimate back-street bar we had previously spotted and were rewarded with a seat on its high wooden bench surrounding the central bar presided over by a lovely landlady. Framed in gold above was a photograph with Freddie Mercury who had clearly enjoyed a few beers bought from her! 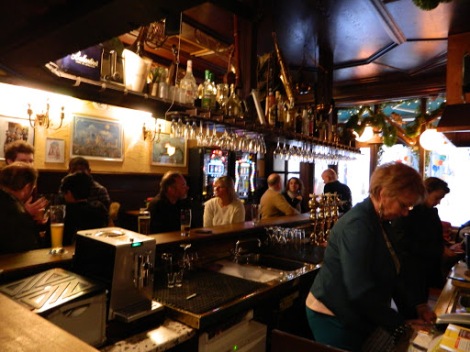 After a couple of beers we were subject to the attention of the locals alongside us. Speaking Bavarian, not German as they were keen to point out, we pigeon-chatted about our day in their city. Keen to know more about us the revelation of travelling without children suddenly started a mass whip-round. It seemed a local tradition was to offer childless couples a few small pennies ‘for a baby’. Momentarily wavering between toe-curling embarrassment and genuine delight we both opted for the latter and shrugged good naturedly at the drinkers being pressed for money for our cause.

Leaving almost 95 cents richer and offering ‘dankes zu alles’ we tumbled into the street and headed, of course, to the Hofbräuhaus. Packed with stag and hen parties jostling for tables against coach parties of tourists and celebrating FC Bayern Munich fans we were cheerily waved to a spot by a bevvie of Bavarian beauties! The girls on a ‘bride night’ were negotiating the attentions of a neighbouring table of stags and glad for some English good-humoured company.

A large jug of beer each later (and a heroic effort to demolish a pretzel between us) and we were ready to sneak upstairs to witness the ballroom’s party. An oompah band on stage was drowned out by the 200 or so very drunken boys and girls singing football songs and student slogans.

The national anthem caused them all to stand and salute the air whilst seemingly singing aggressively, but that may have been the sound of the Bavarian language to our uneducated ears. A bit eerie though, considering our reflections of the purpose of the room earlier in the day. Time to go home to Bertha! 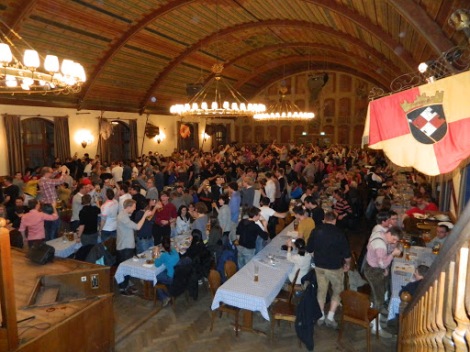 Back on the U-bahn at 9pm it was hardly an epic night out but we’d had our fill of Bavarian hospitality!

The mile walk back to Bertha from the station was illuminated by the vivid red lighting of the stunning Allianz Arena celebrating the homes team’s triumph earlier in the day.