We left France early to stock up on gastronomic goodies and cheap fuel before crossing the border back into Germany.

Arriving at our chosen aire in Bad Krozingen, a spa and thermal bath town, we commented on the number of folk tottering about on walking sticks or crutches, or speeding about on Nordic poles.

We’d experienced German spa towns before when visiting the north of the country en route to Berlin. They have a curious mix of genuinely ill or disabled clientele mixing with fun-loving bathing tourists.

The towns seem to grow out from the many ‘kliniks’ so that each street bears a name related to bathing, or medication, and the local shops sell over-the-counter drugs whilst restaurants parade super healthy salads and waistline-reducing hot meals.

Upon our early arrival we decided to catch the train to Basel and get a taste of Switzerland. With the usual stopping service not running to time we risked a ride (together with grinning locals) on the fast express “Ice” train from Cologne. 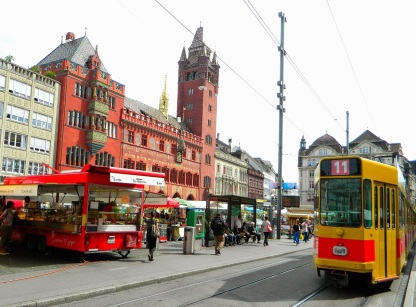 The ornate Rathaus in Marktplat

We crossed the border an hour early and were sitting in Basel’s medieval markt square devouring smoky bockwurst for an early lunch at noon.

Typical and hapless Americans joined us at a makeshift table and fussed about not having any cutlery to eat their banger and bread lunch. Once again, and this time fittingly, Simon’s trusty Swiss army knife saved the day.

View across the Rhine

Basel is an elegant riverside town that climbs up the steep banks of the Rhine to its impressive Munster. Luxury shops wind their way up tram-lined streets dotted with ornate fountains and drinking wells.

Our three hour walking tour took us up steep hills and down countless steps. The meandering was hot work so we gladly plunged our wrists into the cool, clear water. 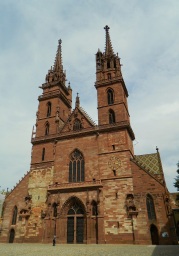 Munsterplatz was lined with four and five storey ecclesiastical mansions all renovated with wooden double glazed windows and painted, it would seem, in a Farrow and Ball colour palette. Utterly gorgeous for any fan of period paintwork! 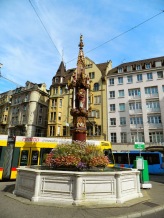 Fischersplatz is home to ‘Switzerland’s most beautiful Gothic fountain’ – their words not ours – and indeed the ornate statuary was charming to look at.

That was when you could glimpse it between passing trams, buses and traffic, for it seemed the fountain was now a central transport hub.

Crowds of people gathered around it but none of them looking at it, rather for the arrival time of their expected ride.

We jumped on a tram (it seemed the done thing to do) but arrived at the Basel Badische Bahnhof 90 minutes too early for our return train.

We returned to town on the next tram to walk alongside the river and watch mad young swimmers attempting to float along the fast current underneath the citadel’s many stone bridges. We mused that this would never be allowed on the Thames!

Friday afternoon in the sunshine

The train ride back through quickly emerging fields and valleys in the late afternoon sunshine was lovely. Best of all, it was free on our Konus guest passes. We crossed the border back to Germany giving thanks for our tourist tax.

The next day was all about relaxing.

After a cycle ride through pumpkin and hop fields, we joined the throngs at the Bad Krozingen spa for a Sunday treat of bathing and pampering. Inevitably a private experience turned out to be very public as German elderly, ill and holiday-makers looked interestedly at us, as we did them. We treated ourselves to a full body massage each and aching legs, necks and backs received a pummelling gratefully.

Back at Bertha’s cellar it was time to open some French bubbly and enjoy a farewell sunny evening in Germany.