We headed west to the border with France. Our last day in Germany was spent on the road or in supermarkets stocking up on ‘must have’ larder treats.

Sunset saw us camped in an empty aire by the lake at Blieskastel Wheir where we had the beer garden to ourselves and enjoyed a final bottle of German beer on a bench in the warm evening air. 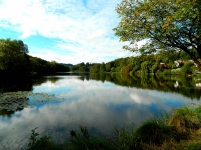 Sunset at the Wheir

Next morning having crossed the border the A4 toll road took us easily and quickly to Metz where we lucky in getting the last space on the city’s aire by the riverside.

Our destination was the mini Pompidou art centre which we had wanted to visit when in Metz four years ago, but it hadn’t been fully built despite the deadline of early 2010. Dressing up a bit – at least getting out of walking gear and into a dress (me) and a jacket (Simon) – we bowled into the busy centre.

Dodging a large demonstration by local public service workers protesting against cuts to funding (who isn’t?) we found the tourist information centre and were given the news that ‘mais aujourd’hui est mardi, le Centre Pompidou est fermé’. Oh. Rats.

No matter, we did our own walking tour of the impressive medieval centre and enjoyed again its magnificent Gothic cathedral and stained glass windows, including those by Chagall.

Down on the riverside we climbed the old ramparts and turreted walls and had views back across the city.

The Gare Central impressed us with its sombre gothic façade in a setting of townhouses with baroque decoration and renaissance balconies.

Inside the station it is pure art deco and we wandered through the vast main concourse and tiled walkways for a glimpse of the architecture of the Pompidou.

It turned out that the demonstration had since ended and hundreds of orange tabard-wearing workers were also heading that way for some sort of rally.

They looked out of place passing underneath the massive wooden-branched canopy of the museum.

Back in the centre we enjoyed the famous covered market before settling down with a small French beer in a sunny corner behind the cathedral. Beleaguered and suited office managers were doing the same and discussing the likely outcomes of their workers’ protest.

It was interesting to listen in on public sector angst in another country. It also felt good to be back in France, and despite missing out on the art we knew we had the good fortune of a safe place to stay nearby for the night.

That’s all the trip luck you need!

A return to the Metz aire

Sunset at the Wheir