The town walls of Verdun

From Metz, our route west and north to Calais took us past Verdun where we decided to stop for a day.

Simon’s recent radio broadcasts on the BBC’s WW1 project has focussed on the Western Front and neither of us knew anything other than the legendary name of this embattled area. We simply had to pull off the E50 to explore.

We found a car park but couldn’t find the tourist office, instead meandered up to the impressive ‘monument to victory’. 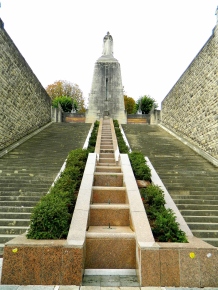 The Verdun Monument to Victory (2014) 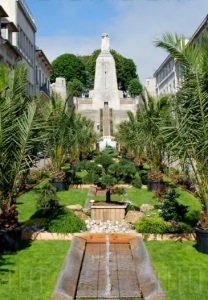 The Memorial in the tourist brochure

We were indeed impressed by its size and scale, vaguely fascist in design, with great pink marble steps that lead down from the statue and through the centre of the city to the waters of the Meuse.

It was later when we saw a photograph of how the monument originally looked in the tourist magazine, with tropical planting, grassy banks and fountains that it suddenly seemed rather dilapidated. Wandering around the historic centre of the city we spotted gun and shellfire wounds to the mortar of the old buildings. 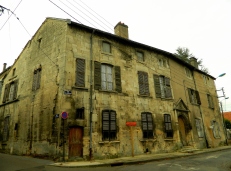 Behind the monument and above the town centre is the former episcopal palace, now a centre for world peace. This beautiful stone palace boasts floor to ceiling sash windows, rose windows, panelled walls and rooms lined with elegant casement cabinets.

The interior is painted in very light muted colours to give the effect of a canvas on which exhibitions are displayed. It was a treat to amble through the many rooms that connect to each other through folding and sometimes hidden doors. 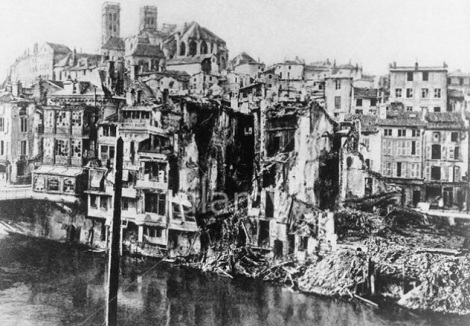 The exhibition space included information about the Battle of Verdun and it was here that we learned about the futility of the 300 days’ fighting between Germans and the French and Canadian Allies. Essentially the German army used the battle as a fore-runner for a bigger offensive, later to be known as the Battle of the Somme.

The French generals stubbornly refused to surrender Verdun and its surrounding area and consequently soldiers and civilians were mowed down in the early experimental days of mechanised warfare. 300,000 died and eventually the Germans melted away, having learned the lessons of their new military practices. The name of Verdun has become synonymous with the futility of war, but the experience is also lauded in French history as symbolic of resistance.

A statue of the ‘children of Verdun’ represents the five different elements of the French army; cavalry, infantry, sapper, artillery, territorial.

Even during the bloodiest years of fighting the French themselves eulogised ‘the sacred way’ to Verdun, encouraging new recruits to the frontline to see themselves as willing sacrifices to be made for the redemption of the country. It was very moving, and not a little disturbing.

We collected some information about battlefields in the local area and went to camp for a night alongside the river at Dieu-sur-Meuse, a typical rural Lorraine village. Some of the old houses have been renovated whilst others are crumbling into the main streets.

An informative and well signposted walking tour gave information about the weekly sticks and stones fighting between the local Catholics and the Protestants of a neighbouring village, staged every Sunday on the marshy land in between them. It seemed that when the French weren’t fighting someone else they were busy fighting themselves.

As the heavens opened we scampered back to Bertha and spent an evening in gloomy reflection. Thank goodness the wine-making families of Dieu-sur-Meuse survived the local Sunday showdowns all those years ago. 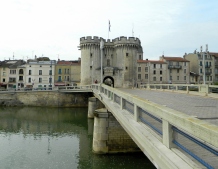 The town walls of Verdun 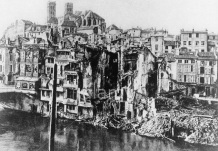 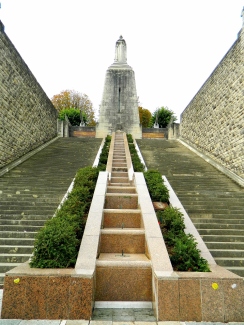 The Verdun Monument to Victory (2014)

The children of Verdun memorial