Overnight temperatures in Bertha were not getting below 30 degrees or 86 Fahrenheit as measured by our travelling (broken) altimeter ‘the orange thing’. It was time to break out our new purchase, a light plastic fan which resembles a mini turbine with a smart blue plastic trim. It arrived from China days before our departure, so in a nod to a favourite ‘24’ villain, we christened it ‘Cheng’.

Cheng did his best to blow air around the van but after two hours he was overheating and adding to the problem. Suffice to say sleep came in patches. When the town’s bells tolled eight we got up and out on our bikes, in a bid to create our own breeze. 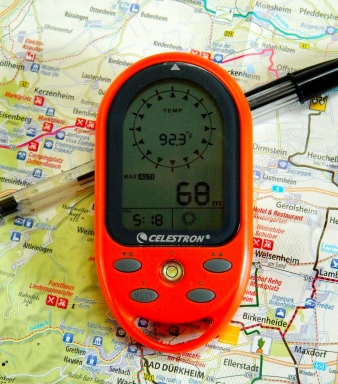 Around the river and up into the forest from Bad Durkheim are two impressive ruins, the cloistered abbey of Limbourg and the 13th century castle fortress of Hardenburg. The enormity of their scale and the might of their engineering is awe inspiring. The redstone castle has seven meter thick curtain walls, watch towers and east and west strongholds which would have housed initially archers, then armed soldiers firing cannon and later, arquebuses.

The vanished interior would have boasted roofed halls which became sumptuous ballrooms, a forge, smithy, stables and residential quarters. It was the seat of the Counts of Leiningen from the 13th century until it was occupied by French troops in 1690, which blew up large sections upon their departure. The French Revolutionary Army almost completed the devastation when passing through in 1794 but what remains still resonates with power and authority.

Up on the west stronghold 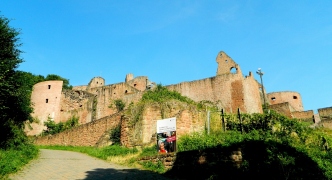 Courtyard with a view

Returning back via Ungstein where the Wein Fest still had yet to get going we mused on the dignity and determination of the minds of the Counts who constructed their stronghold,  whilst in a biergarten getting ready for its ‘British rock band night’.

German rock chicks of visibly varying ages were stringing up coloured light bulbs, looking anxiously for customers and chatting excitedly on mobile phones. It was going to be another long, hot night on the wein strasse.