We were packed and ready to leave Rothenburg at 9am but were inevitably delayed by departing packs of fussing Italians at the aire’s only service point. Still, we did the busy drive along the autobahn and were parked up in a favourite overnight spot in Nuremberg by 11.30am.

Having visited this lovely city twice before, we’ve been fortunate to see all of the sights so instead spent the day meandering about and people watching. The scorching sun (40°C in the centre) sent us into the town’s museum to see an animated film explaining the city’s rich cultural history.

Private viewing of the Noricama film

Actors played key figures from the past including kings, emperors, painters, poets and merchants. It was interesting to understand the repeating pattern of the city’s growth and decline, built initially on religion as the seat of the Holy Roman Empire in the Middle Ages, then on trade as it became one of the medieval powerhouses of commerce. It is associated with the Nazi party, which hijacked its imperial history in an attempt to portray ‘the third Reich’ and Nuremberg as the cultural homeland of their ideology.

The city was a symbolic rather than strategic target for allied bombers in the Second World War who nevertheless destroyed nearly half of it in January 1945, including many of its medieval landmarks. Immediately after the war ended it was the site of the Nuremberg Trials of Nazi war criminals and you can see Court Room 600 in the central law courts today. 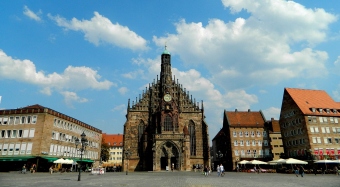 Considerable restoration work was carried out after the trials ended and the city is today an interesting blend of Gothic church architecture, high roofed and half-timbered patrician houses and late 20th century shopping and civic centres.

An honoured tradition is the old wursthauses which cook up Nuremberger sausages over hot smoking grills. We joined a terrace full of over-excited Americans, animated not by the delicious food but by the overbearing presence of a grinning celebrity chef in their midst. Ignoring Rick Steeves (and his clumsy entourage) we tucked into a plate of the delicious finger-length bangers on a bed of highly pickled sauerkraut served with juniper berries and hot senf – a mustard sauce.

Cooking up wurst in 40 degrees inside and out

Needing to walk off lunch we ambled around the fortified walls and encircled towers before catching the u-bahn back to the aire which is in the city’s parkland and former home of the Nazi party rally grounds.

The authorities can’t seem to decide what to do with the Luitpoldarena and grandstand of the Zepelinfeld so they remain derelict behind high wire fencing. Signs advise you to enter at your own risk which of course everyone does, and as a passing American remarked, ‘Hell, I didn’t come all this way not to stand where he stood’. 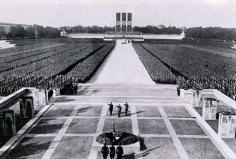 The fascinating Dokumentationszentrum museum chronicles the myth-making and public orchestration by the Nazi party of their hideous cult at the Reichsparteitagsgelande. We had visited the exhibition before which ends in the stunning and only half-built Kongresshalle, now home to the Nuremberg’s philharmonic orchestra. Click here to read about our previous visit and to see images from the rally and parade grounds.

Musing on the ghastly history of this place once again, we joined park goers and returning office workers emerging from the u-bahn stop, conveniently next to the benches of the park’s large biergarten.

It was a fascinating mix of local characters, tie-less office workers, smart young women in party dresses and high heels, gangs of students, groups of tourists and travellers like us. No one it seemed stopped for just one beer, so likewise we enjoyed a couple of glasses of Helles (lager) as the chat around us related mainly to the unseasonably hot week in town.

At 7.30pm, it was still 40°C and with no sign of the evening cooling down as the liquid sun melted into the darkening treeline surrounding the park.

Returning to Bertha we recalled that on our first visit to this fascinating city the overnight temperature was -1°C. Today’s heat, like the freezing cold then, couldn’t diminish our enthusiasm for Nuremberg which is a truly endearing place.