The new week meant a new country and we left Austria by climbing up and around the Salzkammergut Valley to return to Germany, this time to its south.

Bad Reichenhall is a smart spa town ringed by mountains and rich on its legacy of salt mining. It’s also the gateway to the beautiful Berchtesgaden National Park and is a lively place, full of local life as well as visitors to the many clinics and spa hotels.

The public gardens are beautifully and expensively planted with collections of exotic palms, ferns, birds of paradise flowers and irises. Benches, wooden deck chairs and sweetheart seats invite you to long moments of rest and people-watching.

The striking Gradierwerk, the second we have seen in Germany, was busy with people promenading along its wooden terraces and inhaling the pure air. Built in 1909 as part of the town’s spa offer and making use of its local salt, it is a recognised form of health benefit.  Salt water is trickled down tall walls of Gradierwände, long layers of blackthorn twig, resulting in a salty and misty air which is breathed in deeply by the visitor.

On a hot day, it’s also a very soothing and cooling place to sit and relax – unless you are an English traveller minding your business and walking your bike past the fountains. A stern park warden grumpily accosted us and remonstrated about having our bikes in the ‘nur für menschen’ or ‘people only’ park! 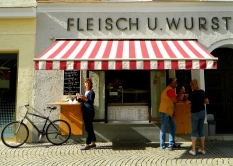 The town continues to produce salt for gastronomic delights. We visited the old salt mine which is now a museum and looks from the outside, with its arched doorways and steeple-topped roof, like a temple to the ‘white gold’ and not at all as we imagined. The shelves of its tiny shop are lined with salts mixed with herbs and spices for imaginative culinary use. We couldn’t resist a small pot of kartoffel and pommes salz for the occasional chip!

Cycling in the warm evening sunshine past the crowds returning from the last sailing of the cable car up to the Predigstuhl, we meandered along the banks of turquoise and white river Salach.

At Berchtesgaden the next morning via a complicated mix of rail replacement buses – work is always carried out in the summer months to ready the rail system for the snow-packed winter days – we took one of the Jennerbahn’s small gondolas to its middle station for a walk down to the emerald waters of the Königssee. 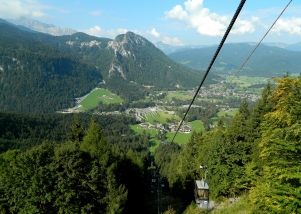 Up the mountain path

Hiking endlessly up the long and winding Königsbachweg, a service road for farmers and winter sports companies, we passed herds of grazing cattle and young calves, dozy in the hot sunshine.

The air was pure and at 1200m the light was dazzlingly clear. Berchtesgaden is framed by six mountain ranges and against the high blue skies their towering rock faces stood out in sharp relief.

Wondering when we might actually begin a descent it was a treat to spot a mountain bar busy with other hikers tucking into its simple fayre of beer and cake. With the budget in mind we’d prepared a picnic but it seemed churlish not to join a bench and enjoy a cold glass of Bavarian beer.

The hut proved the turning point as from outside its rickety wooden gate the trail turned down the steep slopes of the Hochbahnweg. 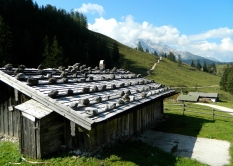 Being a rough gravelled road the surface was easy to walk on but in places so steep it was impossible not to jog. For 600m we were challenged to stay upright and upper leg muscles were put strenuously to the test (and sorely the next day as we found out!)

It was an exhilarating descent through the thickly forested slopes with tantalising glimpses of the lake below. Königssee seems more like a fjord, as it carves its emerald way through the mountains.

At 602m above sea level, it’s Germany’s cleanest lake and quite probably its most serene. Battery powered ferry boats move cleanly and soundlessly between stops along its banks and private moorings are banned.

Folklore surrounds the lake, said to have been created by Angels, and dominated on one side by the Watzmann mountains, whose peaks commemorate the family of a cruel king petrified in stone as punishment for his crimes. Nearby the sleeping witch, Shlafende Hexe lies permanently looking skyward.

Less enchantingly, and rather more gruesomely, the craggy Kehlstein is topped by the former ‘Eagle’s Nest’, built by Borman as a fiftieth birthday gift to Hitler. Nowadays a restaurant, you can visit it only on a guided tour, the highlight of which is the spectacular view across the Bavarian Alps. Hitler apparently ventured onto the balcony only once as he had chronic vertigo.

Nearby Obersalzberg was blighted by Hitler’s attentions in the 1930s when he turned it into a headquarters for his quango of Nazi followers. We had visited the fascinating Dokumentation  Zentrum previously and learned much about how a small traditional farming community was overturned, and turned out of their homes to make way for Bormann’s construction workers.

Back in Bad Reichenhall, having cheated the rail replacement bus by using a local one, there was just enough energy in the legs to collect the bikes and cycle back to another warm evening outside of Bertha.