Robert Louis Stephenson said that “to travel hopefully is better than to arrive” and he made a good point. The journey, ultimately, is the reward for all of those who venture out simply for the highs and lows of moving through different countries and cultures.

Travelling means taking life at a different pace and opening yourself to new and often unpredictable experiences. It has a lure of its own and requires a particular attitude. However firstly, you must depart!

Our departure was chaotic. Busy weeks of work and essential house and van maintenance, ending with a happy family wedding, meant we had just one day in which to action the carefully drawn up ‘to pack’ and ‘to do’ lists.

Roadworks, several road accidents, inevitable tailbacks on the M25 and a dangerously empty fuel tank meant we arrived at Dover with just 20 minutes to spare before the ferry left. Up on deck it felt surreal to watch the nearly-white cliffs ebb slowly into the distance.

Bergues is a short drive from the busy French port of Dunkirk. The town is a former fortress designed by Vauban in a characteristic hexagonal shape and surrounded by a moat. Its impressively rebuilt walls are punctuated by entrance gates and defensive bulwarks.

Working for Louis XIV Vauban fortified more than 300 towns and cities in France, 12 of which are awarded UNESCO world heritage status. Bergues is not one of them but is an appealing and picturesque town to wander around in summer sunshine.

Bergues is known as ‘the other Bruges in Flanders’

The prettiest corner, somewhat bizarrely, is the ‘ancien abattoir’ festooned with flowering geraniums and set above the waters of the main canal at the edge of the town walls.

We leaned across the canal bridge and observed the noisy weir behind it. No doubt the water’s rush quelled the bellowing noises of the animals and helped to hasten away the blood and stench from this most industrious end of town.

Sipping an expensive and very small glass of beer in the central square in the shade of the scaffold-clad bell tower, it felt good to release the tensions of the last weeks and look forward to the travels of the next few, with good humour and hope.

The first night away

Swapping one fortified town for another we ventured to Hulst in Holland.

Just across the border with Belgium and south of the Hook of Holland, Hulst was a wealthy Flemish harbour town in the Middle Ages. Fortified in the 17th century it still boasts a double moat and defensive ring of six gates, nine ramparts and its original mill.

The windmill on the town walls

Hulst is known as the ‘city of foxes’ being credited as the home of Reynaert the Fox in the 13th century epic Dutch poem, which is said to have inspired Chaucer and Shakespeare. We found our way along its town walls navigating with a beer mat which we had picked up on an earlier visit in 2012 during a Christmas Market foray.

At that time Hulst was under snow and celebrating its Mid-Winter Festival. Stilt-wearing Ice and Snow Queens paraded through the cobbled streets in a magical procession which included an ancient old goose-herd and his noisy sheep dog corralling and cajoling their flock of snowy white geese to the delight of crowds of children.

We vowed then to return and see the town in summer time. 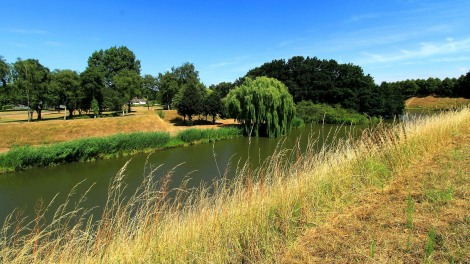 Resisting ice cream in favour of a visit to the towns brewery, we treated ourselves to a late afternoon beer in the shade and having had a small breakfast in France and light lunch in Belgium it was soon time to tuck into the Netherlanders’ favourite of Moules Frites for a dinner in Holland. Now we were on our way!

Navigating by an old beer mat

The windmill on the town walls

Bergues is known as ‘the other Bruges in Flanders’