Romantic Cēsis, home of the Livonian Knights who built a stronghold to defend and a church to be remembered in, amongst the pagans. Alternatively, think of it as ‘the cutest little town in Latvia’, as our guide book advised us.

Staying alongside the Gauja at a busy campsite that was also a canoe hire business, we cycled up the steep couple of miles to town, bouncing along on the high pavements. 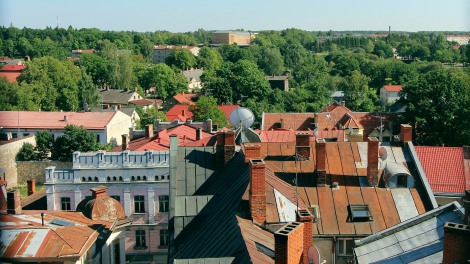 Cēsis was being rebuilt for the summer it seemed. An army of road workers were replacing the historical cobbled streets with modern brick granite paving blocks.

The ‘new’ castle, an 18th century manor house, was entirely under scaffold. The old, Livonian castle was swagged with green netting and its little café was closing at 5pm. 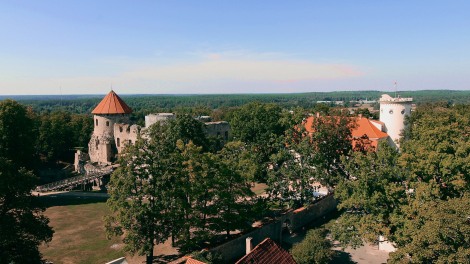 We bought a can of Kvass, the Baltic’s non-alcoholic and extremely popular yeasty brew that tastes like a sodden Soreen malt loaf, then wandered down into the parkland and around a luminous green pond.

Apparently the ‘cutest of all paddle steamers’ would take us around it for two euros, but the aforementioned was padlocked at the shore and we could have splashed across anyway in ten wading steps. 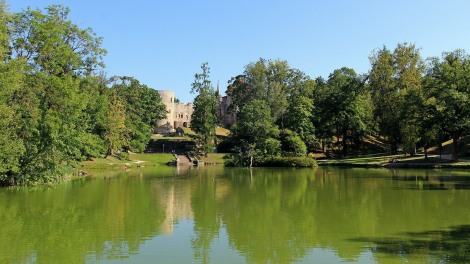 Inside St John’s church all was calm, all was bright. Despite a major damp problem, which was being remedied by stripping back the first course of plaster work to reveal the original cobble and later brick supporting wall, the church was open to visitors to gaze upon the tombstones of the Livonian Knights.

The putty coloured pews and simple decoration of the walls and ceiling, painted in lime wash and patterned with russet red pigments, had a cooling and peaceful effect in the hot, bright day. 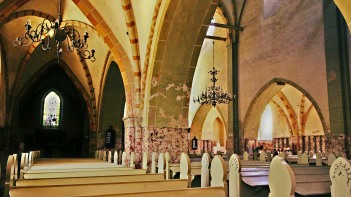 Inside the Knights’ church

Back at the campsite we chatted with a charming young man, Tom, one of the teenagers in charge of running the site on a 24-hour rota.

Tom’s views on the role of Russia in Latvia’s internal politics, Donald Trump, Brexit and climate change were refreshing and encouraging. He endorsed the view that we had been forming that ongoing Russian interest in Latvia is holding back a truly free economy, and influencing political administration to favour Moscow, but we all saw reasons to be hopeful.

It had been a very interesting first visit to the country. On leaving however, the old bugbear bit us. Travelling on four wheels, and on two, is a challenge in Latvia. 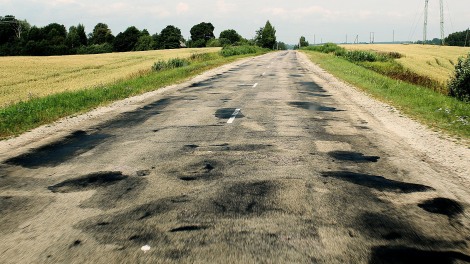 The bumpy pot-holed road out of Cesis

The road network, outside of Jurmala and the fast stretch of motorway to Riga, needs much greater investment and better management.

The roads are generally appalling, patched up unevenly with tarmac and asphalt, and by all accounts better to drive on in the winter when packed down with snow.

Nor does the country favour cyclists. There is little (we saw no) provision of cycle paths and you are expected to manage cycling along the sides of main roads clutching the edges of flaking tarmac or to manoeuvre a way up on the high pavements amongst pedestrians who clearly do not expect you to be there. 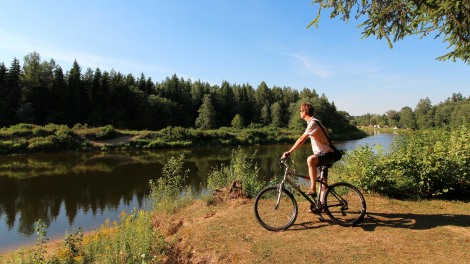 Being ‘invisible’ was something we commented on frequently. Whether strolling around a town, a supermarket, or attempting to order a coffee at a café, it seemed that we had both donned an invisible cloak. People simply did not see us. Except for children, who looked at us wonderingly.

We’ve experienced the same elsewhere in other Eastern European countries, so it wasn’t a shock and nothing we took personally. If I’m not important in your sphere of life, then you don’t see me. It wasn’t meant to be insulting, it was just a case of priorities. It was interesting though. Onwards to Estonia…

Inside the Knights’ church 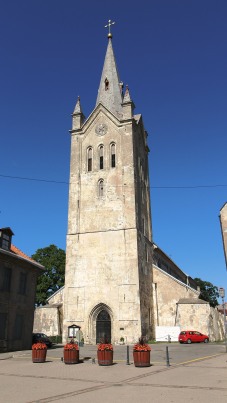 The bumpy pot-holed road out of Cesis