Karlshamn is the historical site of emigration by the Swedish to settle in the New World.

Many thousands of families left for the promise of a better life in America, and most made their homes farming land in Nebraska and the Mid West, similar to that at home.

The emigrants monument looking to America

Emigration is remembered at the town through a sculpture of a young hopeful couple at the harbour, as well as at former hotels or hostels that the emigrants stayed in before their mass departure. Karlshamn has been immortalised in novels depicting the trials of the Swedish emigrants.

However, in the week before the General Election it seemed the whole of Sweden was discussing immigration. Karlshamn’s large main square was full of candidates electioneering and the air was full of politics.

Depressingly, the busiest stall was that of the far-right party, Sweden Democrats, who were reported to be gaining momentum in the polls on an anti-immigration policy.

We chatted with a young café owner who assured us the populist vote was not the popular one. “We are Swedish and our hearts are free and open to the world and we want to stay that way” she proudly declared.

The style is unique to the town, as the front door is positioned in the middle of the house and is framed by two wooden columns which are painted in contrasting colours to the main theme. In the narrow and winding lanes behind Drottninggaten cluster groups of former fishermen’s houses, also painted in bright colours.

A few examples of half-timbered houses pepper the main routes into and out of the centre and down to the waterfront. The harbour was engineered for movement by heavy freight during the heyday of stone quarrying for granite in different colours of grey, pink, orange and black. Now, it’s a lively pleasure harbour, with regular sailings out to the 270 islands of Karlshamn’s archipelago.

Lining the waterfront are smart office buildings in which workers are treated to dreamy views of the harbour out of floor to ceiling windows. (Not to mention the ground floor cafes and bars that open onto the smart decking. Just saying.) 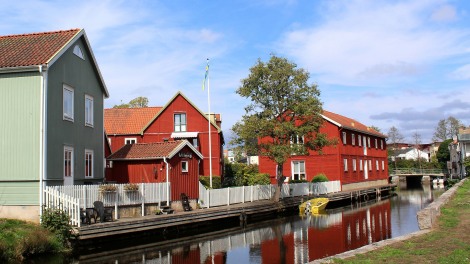 We left Karlshamn wishing it well for the election ahead and stopped along the coast at pretty Sölvesborg. Originally a Danish town as the region of Blekinge was not held by the Swedish until the 1600s, it retains a distinctly Danish feel.

The pretty town centre is painted in a contrasting palate of dark and soft pale colours. Houses and shops are decorated in apricot, vanilla, pale yellow and a uniquely local frothy pink called Lageras Pink after a popular architect who lived here. The market town was very quiet on the afternoon we visited. Gift shops and art galleries were enticing but closed. A florist and a small supermarket were open.

A cheeky treat from Ulrika

We headed down to the marina set along the town’s south bank and waited for a long time at the barriered railway crossing. A few other people arrived in cars and on bikes, and after 20 minutes or so the barriers rose without a train having passed. We thought this remarkable but no one else seemed bothered, and once everyone had crossed we were on our own again.

The medieval street pattern swirls out from the central square and around Sölvesborg’s oldest building, the 14th century Church of St Nicholas. Originally a small wooden building erected around 1250, the later brick-built church was extended in the early and middle ages. 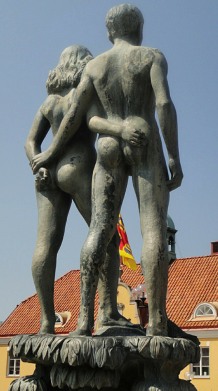 More cheekiness in the main square

The church of St Nicolai

Most striking are its murals. It is decorated with highly descriptive paintings thought to date from the early 1400s.

Scenes from the Old and New Testaments, as well as a controversial depiction of the circumcision of Jesus are painted onto the walls and arched ceilings. Fantastical figures mingle with saints and devils and lesser known characters from the bible, including scenes apparently from the early lives of Mary’s parents.

The paintings are in extremely good condition having been plastered over at some point and rediscovered during renovations in 1905. A richly decorated four storey altarpiece from 1622 still stands intact and a large crucifix from 1402 hangs in the middle of the nave. 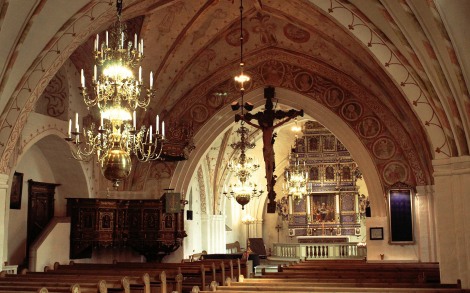 Sölvesborg has one of the region’s most intriguing rune stones. Now standing in the entrance to St Nicholas Church it carries a peculiar, poetic message from the 6th century. One of the passages that has been translated states: “The settlers, the newcomers were given seeds by Hathuwolf and Hariwolf poured wealth upon them. This is a deep secret. I have hidden deep secrets here. Boundless in malice, whoever breaks this down will die.”

A smart steel bridge in a unique linked design straddles the Baltic between the town’s shoreline and the neighbouring mainland in the east. The 756-meter bridge is for pedestrians and cyclists only and is part of the well-planned network of cycle routes around the region.

We admired it from the quiet waterside gardens that line the marina. No one was on the bridge, in the gardens or messing about in the boats. Sölvesborg is extremely pretty but it must be said, compared with Karlshamn, it is extremely sleepy. 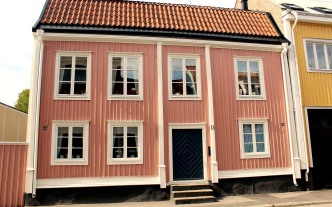 The emigrants monument looking to America

The church of St Nicolai