What a difference a day makes. Over 24 hours we saw one of Spain’s most beautiful, but little visited, Renaissance towns glow gently in the gloom and dazzle in the sunlight.

Beautiful Baeza was established as Beatia by the Romans and later became a capital of a Moorish fiefdom. It was the first of the Andalusian towns to be won back in the reconquest and was settled by Castilian knights who ushered in an era of Medieval splendour culminating in the building of its Cathedral and University in the 16th century.

Narrow street to the cathedral

It is a place of many charming corners and easy to drift about in, enjoying the intricate stonework decoration of its public buildings, and the quiet contentedness of its residential streets lined with tall, shuttered palaces and former merchant homes, now apartments.

We visited on a cold, gloomy afternoon at siesta time and had the historic centre pretty much to ourselves.

Orange trees by a palace balcony

The fabulously arcaded central square of Paseo de la Constitucion was empty, but still sporting the purple drapes and banners of the town’s Easter celebrations. As that was now a little over a week ago, it lent an unhurried and relaxed air to the place.

An empty stage was still erected outside of the surprisingly gigantic Cathedral, itself set on a slope above the Antigua Universidad, one of Spain’s oldest. In between both the towering fountain of Santa Maria, designed as a triumphal arch, played water as it has since 1564.

The university building is covered in red graffiti, the signatures and dates of the students who had graduated going back as far as the 17th century.

The original graffiti was daubed on in bull’s blood, but only allowed if the graduate was not from neighbouring Ubeda, due to historic rivalries between the two towns’ leading families (we returned the next day to see it in bright sunshine). 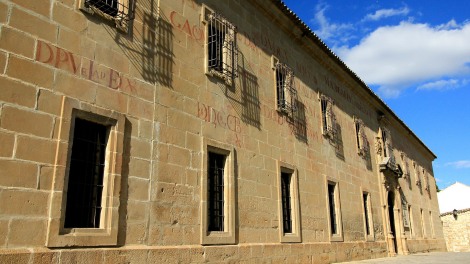 Among the many palaces, the doorway of Palacio de Jabalquinto is particularly striking. Its intricately carved stone work is of a style called ‘Isabeline’ dating to the time of the fall of the Moorish Caliphate to Isobel I of Spain.

The highly decorative work was created by Moorish craftsmen who melded Christian and Islamic styles into an exquisite new art – Mudejar.

A later addition to the town is its 19th century bull ring. Perfectly restored it seats around 2,000 people who watch the spectacle over 10 days in August, every year.

We watched two, very young, apprentice bullfighters practice with capes and hand-held pairs of horns. They were serious and sombre in their movement. We wondered how their parents felt – proud or panicked at their sons’ choice of sport?

Set on a bluff above the winding River Guadalquivir, the eastern side of town was fortified with a high stone wall.

We walked along a remaining stretch, now a popular place to stroll above the valley peering down into the private terraced gardens and allotments of the houses below. One stretch is an open meadow of grass and flowers on top of the original Roman remains.

Two old boy shepherds with a pair of small and lively spaniels were watching over sheep that busily munched on the grasses. The sheep looked goat-like, with long legs and narrow heads. Some wore small clanging bells.

We didn’t know if it was an officially sanctioned arrangement but a succession of visitors in small cars to the shepherds and flock seemed expected, and it was a peaceful scene that no doubt provided for the delicious local delicacy of Manchego cheese, hard and tangy, made from the sheep’s-milk. 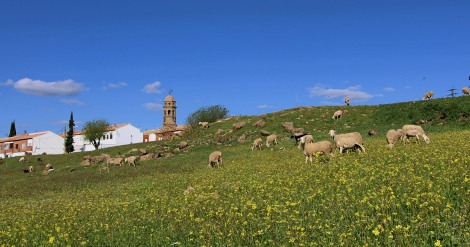 Winding our way back downhill we passed an original Roman fountain. A worn and slightly sheepy- looking youth stood surrounded by four, now headless, lions. They also looked a bit sheep like. It was probably the sands of time, but it made us both smile.

Meanwhile, a bustling wedding party of extremely made-up women wearing short dresses and high heels and goatee-sporting men in blue suits, charged out of the nearby Town Hall for photos by the fountain.

Guests cheered and babies, toddlers and grandparents were enthusiastically shepherded into the picture. It was a touching glimpse of local life in a beautiful town that became a UNESCO World Heritage site in 2003.

Calling into the tourist office we were told that visitors are, in the main, from Spain and that international visitors such as ourselves are very welcome but not typical.

It made the experience seem all the more special and we happily headed back to Bertha armed with two bottles of local olive oil, and a small package of Manchego cheese! 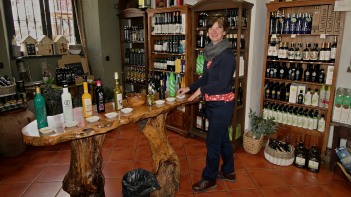 Narrow street to the cathedral

Orange trees by a palace balcony