Heading out with the workers and the snoozing students on the local service from our campsite at Villafranca de Cordoba, we arrived in the city just as the sun rose at 7.30am. The outskirts of the city were surprisingly rural.

Early morning in the Old Quarter

Navigating our way from the ingeniously hidden bus station in the centre of the modern city, we headed south along a wide boulevard of newstands in ironworked kiosks opening up to sell papers to the arriving commuters.

Older men were drinking coffee in cafes, debating the early morning’s general election results which meant Spain, once again, will have a coalition government.

The reward of our early and chilly start came two-fold, as we had our first experience of the narrow and atmospheric alleyways of the Old Quarter by ourselves but for the small delivery vans arriving at the bodegas, cafes and restaurants.

The second reward came as we were able to visit Cordoba’s main attraction for free, for a full hour before the Mezquita officially opened to the masses.

A World Heritage Site the mosque is the largest Islamic monument in the Western world and is truly spectacular. Begun in 785 AD on the site of a former Visigothic basilica and extended over two hundred years, it blends many architectural forms and is utterly mesmerising.

The dimly lantern lit interior unfolds like a forest of stone pillars and arches stretching in all directions. Roman columns of granite, marble and jasper were recycled by the Moors to support gigantic white and red brick archways.

We wandered amongst more than 850 columns with craned necks to follow the patterns that the arches made, forever leading you onward and into the heart of the Mosque, which became a Christian Cathedral built after the reconquest in the 1500s. On our way we passed stone sculptures of the Stations of the Cross, and Christian chapels carved into the Mosque’s arched prayer niches. 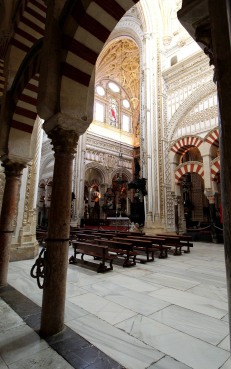 The most exquisite corner though is the Mihrab, a richly ornamented prayer niche, off limits to visitors, but able to be peeked at from behind iron railings. It once held a gilt copy of the Koran.

Its dazzling colours of golds, pinks, blues and reds glowed even in the dimness. Arabic scripture decorated its ceilings, unintelligible to us but captivating. The whole effect was hopeful, a unique place of worship melded by two of the world’s major religions, blending their art-forms. If only life could always be like that too. 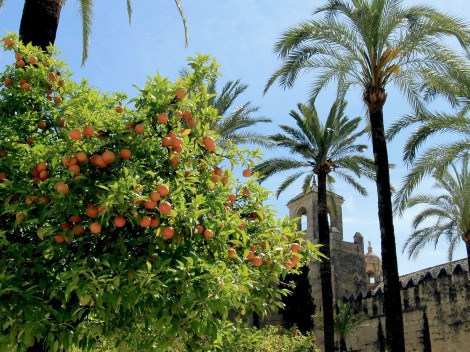 Orange trees and palm trees at the Alcazar

Cordoba was the centre of the Caliphate throughout the Moor’s glorious years in Spain between 700 – 1500. During the 10th century it was one of the greatest cities in the Western world.

The conquering Muslims brought new science and architecture with them, introducing new irrigation methods using watermills that allowed for new crops of orange trees and rice fields, and the astrolabe which aided astronomy and navigation.

They introduced lavish new decorative crafts in the intricate workmanship of silver, bronze and ivory as well as the exquisite external decorations of hand-crafted tiles and plaster-work on their buildings. 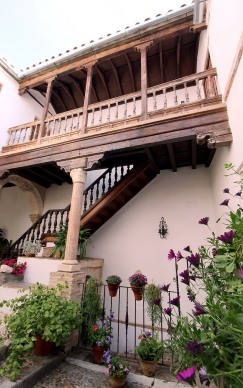 Sophisticated, elegant and refined, the Moorish leaders were also ruthless and capable of great cruelty.

A particularly grisly tale is that of a hapless Gonzalo Gustioz, Lord of Burgos and father to seven sons, one of whom killed a nobleman. In revenge for her son’s death, his powerful mother sent Gustioz to the Caliph with a letter in Arabic requesting that the bearer be murdered. Gustioz did not read Arabic so was unaware of his impending fate.

However, the Caliph decided on a different course and instead had all seven sons decapitated and their severed heads hung in the narrow Cordoba passageway where their father viewed them from his prison in the Casa del las Cabezas, every day. 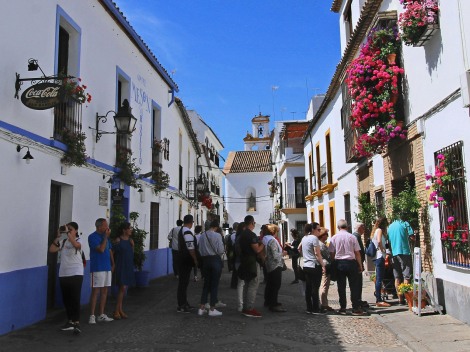 Queue for a patio view

During the Caliphate a large Jewish community was established in the city and we enjoyed pottering around the winding streets of its old quarter, festooned in potted plants and hanging baskets. As the day wore on, crowds gathered at some of the private houses which open their patios for admiring visitors.

We struck out for a later, Medieval merchant’s house built during the 1500s and enjoyed the cool, sheltered patio with its recycled Roman columns and bubbling fountains.

Built around a central square it had covered wooden walkways on the first floor and richly decorated shuttered windows. Inside the rooms were large and airy with clay stoves and fireplaces, and polished wooden floorboards. Interestingly, and following with Muslim tradition, the women lived on one side of the house and the men, the other.

The house was typical of those lining the streets around the Plaza El Potro, located in Ajerquia district and featuring Renaissance fountains, churches and palaces. The Arch of El Portillo accessed the quarter from the old Medina. 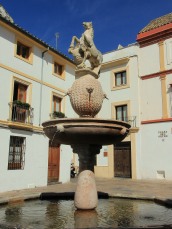 The square was the site of a livestock market, hence a fountain bearing a colt, or potro in its centre. Its inn was mentioned by Cervantes in his novel Don Quixote and became instantly famous throughout Spain. Today it’s a quiet corner on the way down to the wide banks of the Rio Guadalquivir.

We crossed the Roman Bridge, part of the Via Augusta and built in the reign of Emperor Augustus during the 1st Century BC. Some of the arches and the massive granite blocks which support them, ashlars, are still the originals. It gave a wonderful view back to the old city, the Mezquita, Cathedral, Castle of the Christian Monarchs and the Moors’ fortified walls.

By now we had walked more than 10 miles into and around the old centre and it was time for a final stop on the way back to the late afternoon bus.

We headed north to the Santa Marina quarter, a busy commercial centre of high street brands and boutiques with pavement bars full of office workers finished early for the evening and enjoying drinks and tapas. People were smartly dressed in suits and jackets, despite the heat, and we both enviously eyed the many leather satchels and briefcases sported by elegantly dressed men and women. Cordoba is a centre of quality leather tooling.

The quiet square of Capuchinos, named for the nearby convent is tucked away and austere in nature. The whitewashed walls of the convent are dotted with tiny windows and stone doorways. In the centre stands a Baroque work in stone and iron, Christ of the Lanterns, which is visited by many when its eight giant lamps are lit at night. It struck a different note to the magnificence of the Islamic and Mudehar work we had been enjoying all day.

A full day was not enough to experience all of Cordoba’s many different and exquisite corners, but we headed happily back on the bus with buzzing minds, weary feet and a feeling of enchantment.

Queue for a patio view 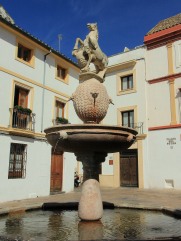 Orange trees and palm trees at the Alcazar

Early morning in the Old Quarter