Arriving by water is always a romantic way to view a coastal town or city and as a hot sun bore down on the afternoon, we enjoyed the cooling sea breezes across the azure and crystal white waves of the Bay of Cadiz.

A frontier town, Cadiz claims to be the oldest in Europe and is a heady mix of architectural styles that blend harmoniously together under clear bright sunlight.

Its compact old quarter is a mix of palaces, merchants’ houses, churches, convents and squares. Wandering around it for an afternoon we were enchanted by the sun-bleached and creamy colours of the buildings.

There were many cool corners in which to sit in shade and admire the grand baroque frontages of many houses, and a multitude of stylish bars and seafood restaurants. As well as spice shops, emblematic of Cadiz’ important role as a sea trading centre throughout the ages.

Old sea walls protect the city from the waves of the Atlantic, which flanks Cadiz on three sides. We walked along the Camino de Sur, on top of the walls for spectacular views in the bright late afternoon light.

The golden tiled dome of the ‘newer’ of the two cathedrals was shining amid its neo-classical towers, and in front the many domes of the old cathedral ‘Santa Cruz’ reminded that originally it had been a Moorish mosque.

Founded by the Phoenicians in the 11th century BC Cadiz was occupied by the Carthaginians, Romans and Moors in turn.

It prospered on wealth taken from the New World after the reconquest by the Catholic Monarchs. Later, in 1717 Cadiz was granted a monopoly to trade with Latin America which had previously brought considerable wealth to Seville. Its many Baroque houses and mansions date from that time and some still have their tall look out towers.

Merchants used to keep watch for their ships loaded with spices, rice and goods approaching the harbour. Well they might. Cadiz was continually attacked including by the British in 1587 when Sir Francis Drake sacked the city in the first of many attacks in the war for world trade.

Across the rooftops to the Atlantic

Nowadays on the international cruise circuit, there were a couple of American tour groups following guides waving flags in the air, but they contented themselves with the big sights of the Cathedral, Plaza San Juan de Dios and a stop at a bar.

We wandered further into the old town and the atmospheric Barrio de Santa Maria, a maze of winding streets with tall and narrow houses in terraces with shuttered windows. Where open, their heavy wooden doors offered tantalising glimpses of columned reception areas, coolly tiled in terracotta and ceramic designs of Moorish style.

Flamenco is an important part of the old town’s culture and the national centre of dance is based here. We heard foot stamping and hand clapping from inside its small theatre as we passed by.

Simon climbed the steps of the town’s official lookout tower of the 18th century, the Torre Tavira for views across the rooftops, and the washing lines, to the sea.

The tower is home to the city’s camera obscura, a device originally created by the occupying Moors, which provides a full 360-degree view from the tower. Down below I searched in vain for the site of an old Roman salting factory, eventually concluding that it must be in the basement of a modern building, most likely the bingo hall. 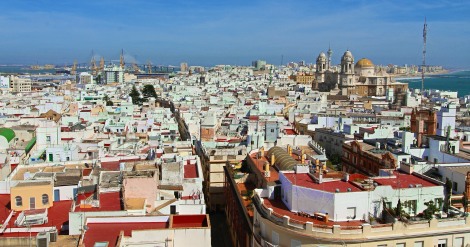 The Romans salted fish on an industrial scale and stored and shipped them around the empire in clay dolums. The fish were a key ingredient in garum, a seasoning sauce that was used to salt dishes.

Known for its many tiny squares, the city is home to the ‘Gaditanos’ (people who live in Cadiz). We imagined enjoying a house-sit here at any time of the year!

Washday on the rooftops

Returning by sea to our grubby and packed out campsite at Puerta de Santa Maria, there was time to round off the day with a treat of a sherry tasting.

Around Jerez and Cadiz, the land’s albariza soil is white and chalky in nature. The grapes grown in the rustic vineyards are used to make the region’s famous sherry, which we enjoyed sampling at a tucked away bar called Bodega Obregen. 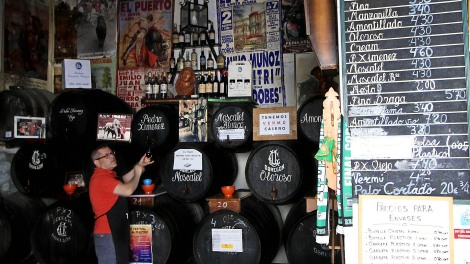 Initially a bit sullen, Gonzales warmed up with our well-intended attempts in pidgin Spanish to understand the different varieties of sherry, and its culture. He explained that across the year, special types of sherry would be drunk at different occasions.

Fino and Manzanilla, the palest and driest, are drunk all year round but especially at celebrations. We knew this from our recent adventure at La Feria in Jerez. Sweeter and darker Moscatel varieties are drunk at Semana Santa and the darkest of all sherries, the creams, are drunk at Christmastime. 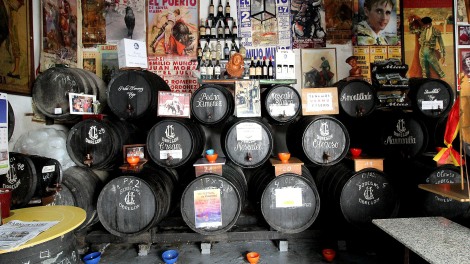 Gonzales was kept busy, filling up plastic litre bottles, brought in by a stream of locals to begin their weekend. It felt churlish not to have a take out.
It was a fine end to a grand day!

Washday on the rooftops

Across the rooftops to the Atlantic