Crossing the border into another country is always exciting. First impressions are of the state of the road and signs of welcome. The border between Spain and Portugal is crossed by an elegant bridge over the Rio Guadiana.

All three of us were amused by Portugal’s border sign which advised us as ‘foreigners’ to leave at the first exit from the road and pay a toll fee.

Pay before you enter

With Bertha’s number plate duly registered against our credit card we were on our way west to the coast of the Algarve. It was Josh’s last night with us, and we enjoyed our final sunset on the beach at Fuseta, a charming fishing village.

We totted up the miles we had walked and strolled together exploring Spain for the last few days. The total was 42 miles on foot. Well done Josh!

One last sunset for Josh

Fuseta doesn’t feature in the guidebooks and as such remains a quiet fishing village of locals. It began life in the 1500s as a place where fishermen kept simple wooden huts for their boats and equipment.

Over the course of the last century it became known for those men who were called the ‘best cod fishers in all of Portugal’. By all accounts their lives at sea were harsh, and many did not return home.

Up on mum’s apartment roof

The houses are characteristic of the Algarve, low slung terraces with flat roofs and chimneys topped with minaret-style flues. Many are decorated externally in patterned tiles, which give the streets an exotic touch and allude to the Algarve’s history as an Islamic kingdom.

Fishing is still the main activity and most of the population work with or around fish. Seafood meals are served up harbourside at family-run and simple bars, set along the main road. Enormous prawns and squid, as well as steaks of swordfish and tuna are grilled over charcoal on homemade iron griddles.

For those in the know, tourism is growing steadily and during the summer months of July – August the population swells to four times its normal size. We enjoyed the relaxed and gentle feel to the village and its beach, set in the calm warm waters of a lagoon.

The sand is shifting along this stretch of coast. A former colony of holiday homes at the sea-most point, the Isla Fuseta, was washed away in 2010. The village’s former lifeboat station stands rather romantically isolated but land-locked in the shallow waters of the protected lagoon.

We took a ride out of the harbour with charming Ribi, in his leisure boat. He told us of the history of his village, the salt and fishing traditions and the new plans to develop a permanent beach along the Isla Fuseta which we boated out to on open waters. EU money is shoring up the sandy islet and securing it against further erosion.

An army of workers were building hardwood walkways and the framework for summertime businesses of beach fun and food. 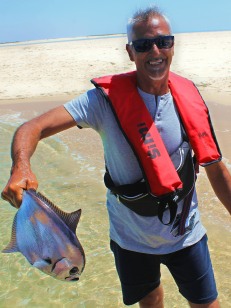 Floundering in the shallow waters, a large and gorgeously silvery-sheened dorada was being harassed by a flock of seabirds. Ribi gamely jumped to its rescue, we thought, then offered it to us for our lunch.

Chuckling at our collective dismay, he threw the fish down into the shade of his boat where it gasped its last as we pottered back inland trying not to feel hypocritical planning our own meal of seafood delights!

Around Fuseta the marshy wetlands of the Parque Natural de Ria Formosa are home to colonies of wild birds and visiting Flamingos as well as the former salt pools and occasional salt mountain, a memory of earlier industry.

The salt was highly prized for preserving fish and flavouring cooking and some salt-farming is still carried out but not on its earlier scale.

The mudflats at low tide are home to the world’s largest colony of Fiddler Crabs, distinctive for their males’ singular large claws which are waved in an effort to attract a female mate. Hours of fun can be had waving back to them!

Unlike Fuseta, Tavira is in all the guidebooks and commended as the Algarve’s most charming town. We took a leisurely ride out on a graffiti-covered train through the salt flats eastwards and spend a day pottering around its picturesque streets and squares.

Set across both sides of the Rio Gilao it was settled by the Phoenicians, then the Moors, but much of its lower town was destroyed in a largely forgotten earthquake and accompanying tsunami of 1722, 33 years before the better-remembered earthquake that flattened much of Lisbon and the surrounding area. 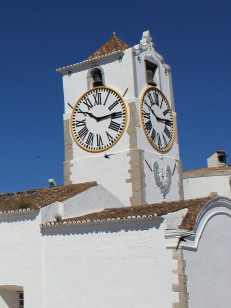 Our Lady of Tavira

A lot of what stands today is 18th century reconstruction and it is undeniably pretty with whitewashed houses, palatial-style and colourfully painted mansions and more than 20 churches.

Tavira’s ruined castle offers panoramic views from its Moorish walls, and the chance to cool down in the shade of gorgeous jacaranda, fruit and fig trees in its pleasantly exotic botanic garden.

Its Roman Bridge isn’t at all Roman in origin but built initially in the 1200s by the occupying Moors. Following its collapse in 1655 it was rebuilt but kept its rather misleading name.

No matter, it’s a lovely place to cross from east to west or sit within its deep stone recesses watching the comings and goings of the town and listening to guitar players busking for money.

Using the same train line, the Linha de Algarve, we caught a second graffiti-covered train westward to Olhao. Much larger than we had expected, this former fishing village now has a bustling marina and busy waterfront of hotels.

It was Saturday and the weekly market was a full assault on the senses. We wandered amongst the stalls piled high with fruit and vegetables, shellfish and seafood, and cakes made with figs, apricots and almonds.

Flashy speedboats and polished sailboats plied the blue waters and a well-dressed crowd sipped on tiny espressos or large cocktails in the hot noon sunshine.

Lunching in a quiet courtyard on seafood, salad and black pig cheeks we all agreed that despite Olhao’s style and Tavira’s prettiness the best place by far along this stretch of coast is charming and delightful Fuseta. Long may it stay that way!

One last sunset for Josh

Up on mum’s apartment roof