After almost a week in the rugged small fishing village, we said fond farewells to Ammoudia and headed north to the Albanian border.

It was tantalisingly close and having tried and failed two years ago to cross it in Bertha from the Montenegrin side, due to the appalling conditions of the road, we wanted to see what it was like at the Greek crossing.

Not having a detailed local map we followed the merest hint of a suggested route in our Collins guide and looked out for road signs, which frustratingly mostly had graffiti covering them.

Perhaps not surprisingly we found ourselves on a lonely mountain road climbing high above the river plains and coastal bays and eventually coming across life in the bustling and hot sunny town of Filiates. Steering carefully through the busy noon centre of lunching locals, loose dogs and teenagers on mopeds we descended the other side onto the flat lush plains of the Thyamis delta.

Sagiada turned out to be the last stop on the Greek coast so we pitched up for the afternoon and enjoyed a coffee on its picturesque harbour.

After a quick dip in the cooling sea, we tried and failed once again to connect online to update our blog. Instead we found the local policeman (having spotted him buying an ice cream) and asked permission to stay for the night further along the beach, which he was happy to give.

Our only neighbour was a reclusive French motorhomer (in skimpy swimming trunks the entire time we were there) so we kept ourselves to ourselves and enjoyed a sundowner in our chairs on the beach to the lapping of the turquoise waves.

A serene evening became a raucous night as the marina clubs banged out dance music until 6am but as our stop was safe and free we dozed through it until it was time for a cup of tea on the beach.

Next morning and we again headed north to the border. We passed a series of fish farms in idyllic coves as well as signs telling us that camping was not allowed.

Driving through herds of goats we rounded a corner and encountered high barbed wire fences, securing cameras and signs instructing ‘no photographs’.

The border post was busy with queuing beaten up Mercedes cars (the Albanian motor of choice). We did a circuit of the post and then returned the way we had come to find another route. Ten or so miles later we were aware that we had crossed an unmarked border as the road deteriorated to a broken single track which was littered with rock fall and gorse bushes.

We drove on until we dared go no further and turned around amongst some grazing cows as the track petered into a dusty trail. Albania!

We spent sunset on Drepano’s Beach at Igoumenitsa watching the comings and goings of the Island ferries and enjoyed chatting with our German neighbours Edda and Uwe. They were heading down to Ammoudia and Edda was looking forward to seeing Pola (the beach dog) who she had been feeding last year.

Edda was travelling in the expectation of taking three stray cats back to Germany for re-homing. Like Carole she has a supply of dog and cat food and treatments and knows the vets to use for paperwork and pet passports.

On returning to Bertha we realised we’d provided our own foodstuff to the voracious beach mozzies and spent an uncomfortable hot night trying to ignore our many wretched and raging bites.

The ferry to Bari was our first experience of ‘camping on board’ which was Bertha’s own mini-cruise across the Adriatic. We were portside on an open deck and had moonlit sea views all night as the ship sped quickly across the straights in calm waters.
Tomorrow – Italy!

We started early on our bikes to make sure of cycling in the morning cool. Intending to cycle up the River Acheron to Kanaliki, the local town for a supermarket shop, we instead got diverted by a sign to the Necramanteon – the ‘Oracle of the Dead’ which Demetrius had urged us to see.

Climbing up the steep hill to the site we were put off by signs advising that no entry was allowed without a paid guide and only between the hours of 11am and 4pm but were happily allowed entrance for just two euros and told to make our own way around as a gang of workmen toiled at reconstruction work being funded by the EU.

The Necromanteion was built on the site originally claimed by Homer to be that of Odysseus’s communication with the dead. In Classical times it was the hill which overlooked the meeting of the Kokitos and Acheron Rivers and the entrance to the underworld, Hades.

The Necromanteion sanctuary is believed to date later from the 4th to 3rd centuries BC and was where pilgrims would travel to endure a ritual of fasting, cleansing (and probably drug-taking) before being allowed by the high priests to find their way through the stone labyrinth and climb down to the sacred hall to commune with the spirits of the dead.

We clung to the steep iron steps which took us down out of daylight and deep underground to the Hall of Hades. It was mesmerising to stand in the darkness of the stone hall which still has a ceiling of 15 porous arches intact and which ran with cold dripping water.

Snake pellets on the ground kept us on the dimly lit iron platform as we smelled the musty air of centuries’ old superstitions and beliefs. This place is also where Persephone was believed to have been forced to reside by the King of the Underworld, thus causing winter to hold its icy grip on the land up above.
It was utterly quiet and eerily mysterious.

The climb back up to hot sunshine and the clanging sounds of the workmen rebuilding stone walls was like waking from a dream. It was a very special experience.

Shunning the necessary practicalities of a supermarket shop we headed back to the coast on a back lane to find Odysseus’ bay, presumably where he came ashore under instruction to seek out the souls of the dead, or ‘deads’ as our map charmingly told us.

Our cycle took us past neat and orderly fields and well-tended vegetable plots.

It was hot now and the air was full of the scents of roadside broom and gorse bushes, wild garlic and herbs. In country gardens we were surprised to see and enjoy the aromas of masses of roses in deep reds and pinks.

Along the farming tracks goats, sheep and cows roamed freely, ringing their bells and ambling good-naturedly alongside us. 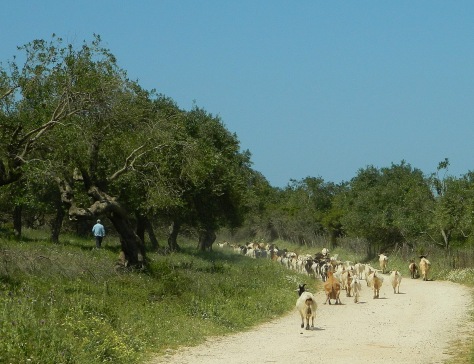 We stopped to ask permission of an old goat herder to cycle through his gorgeous herd of kids and mothers tripping ahead of us on the road.

He urged us, ‘yassos yassos, pass pass, keine problem!’ Dodging sunning snakes and lizards we found the red sandy track to the bay and came across a couple of moored yachts enjoying their own Greek paradise in a beautiful setting.

Our pedal around the cove to Kerentsa introduced us to Lyceon, an enthusiastic café owner who told us of his planned ‘Musical Festival for Mittwoch’ – which turned out to be the Greek national holiday of May Day in two days’ time.

Fortified on strong Greek coffee and lemonade (a surprisingly refreshing combination!) we cycled back to the Necromanteion and out on the roads to Ammoudia for a cooling swim in the crystal clear waters at the beach.

Drying off over a beer and accompanying ouzo at fisherman Michelmos’ bar, our lack of Greek almost saw us buy his entire stock of 100 litres of home-bottled Rose wine.  Michelmos’ customers’ needs thankfully prevailed and we headed home with just the litre and a half to enjoy sampling with the sunset.

Back at Bertha we had been joined by a gorgeous white beach dog. ‘Pola’ was named by Carole who has been feeding her during their visits to Ammoudia for the last three years. Carole’s van included supplies of tinned food, flea spray and worming tablets for the many Greek loose dogs, cats and kittens she knows to expect to encounter on their travels.

This opened our eyes to the care that touring campervanners give to animals shunned in their local community. It is a sad practice that the Greek’s use poisons as a means of ‘controlling’ the dog and cat populations.

Our 30 hour passage from Italy to Greece turned out to be one of luxury!

The “camper all inclusive” ticket bought us a cabin with comfortable beds, a bathroom with a loo and power shower “it’s hot water!” and dinner in the restaurant (with sea view) all for just £218.

The hours spent researching online back in a dark and dismal January clearly paid off!

A peaceful night was punctuated by random blasts on the ship’s claxon followed by the Captain telling us something in Greek.

We both thought we heard references to a compass and amused ourselves conjecturing “has anyone seen my compass?” but slept well anyway.

We arrived under bright blue skies and a surprisingly hot sun into Igoumenitsa at 9am on a quiet Sunday morning. Deck was packed with gangs of smoking Poles who had come aboard in coaches at the ferry’s first stop, Ancona. Dogs newly released from ‘dog deck’ were causing chaos running and weeing about the place so it was with some relief that the claxon sounded and the captain presumably told us all to go to our vehicles, which we did anyway.

We drove Bertha south on the coast road toward Parga and alongside a new highway being constructed.

We passed only a handful of cars and saw no other campers once we continued south from the Parga turn. The road was in good condition and we had our first views of the sparkling blue Mediterranean lapping the white pebbled shores of pine-covered coves.

Inland and the watery plains of the Acheron delta presented acres of lillypad strewn-marshes and we spotted many herons and storks, whilst hearing the chittering of gangs of swallows overhead and the calls of roadside frogs and giant cicadas.

Our chosen stop at Ammoudia was a pure delight. We camped up on the fishing village’s pier between the Acheron and the white sandy beach, alongside three other vans. A stroll along the riverside caused us to meet Demetrious, a fisherman, hauling in his nets after making the last catch of the season’s sea urchins.

Happy to just stand about and chat he told us his about his family, his trade, and the Classical history of the area.

His boat ‘Hercules’ is named for his father, as is his son, a riot policeman being kept busy in Athens, and his daughter ‘Elepherea’ meaning ‘freedom’ is named for his mother who is 82 and living with the family still.

Demetrious has lived in the village his whole life as a fisherman and taverner owner in the tourist season. His dream is to win the lottery to buy himself a bigger fishing boat and better nets.

It seems the local population of frolicking dolphins cause havoc with the fishermen’s nets using them as a ready supply of take-away dinner and breaking the many fragile knots with their snouts to free and feed on the fish.

Our Brit neighbours Alec, Carole and Mary turned out to be from Looe so we swapped tales of Cornish life and enjoyed some happy memories, as well as catching up on news of shared people and places. Carole gave us an old map which proved to be invaluable in getting us about on our bikes over the coming days…